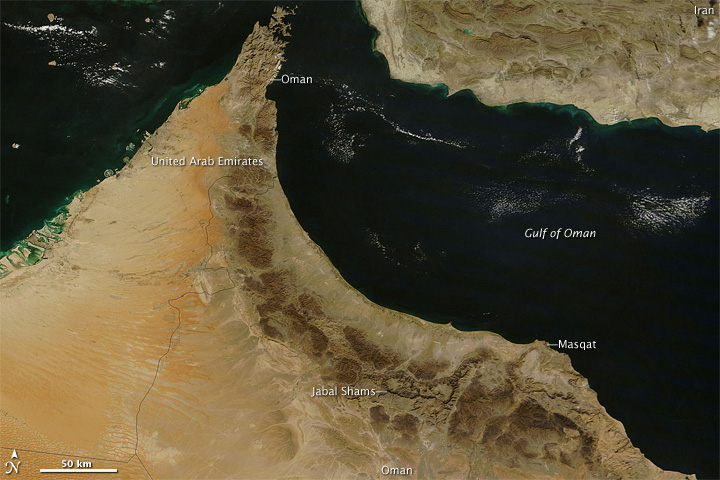 Much of Oman’s landscape is low-lying, hot, and dry. Its extensive sand seas stretch westward into the neighboring countries of Saudi Arabia and United Arab Emirates. Northern Oman, however, contains rugged mountains and some of the highest elevations in eastern Arabia. In this region, relatively cool, moist weather has given rise to a richly vegetated landscape. In northernmost Oman, north of the United Arab Emirates, steep-sloped mountains rise from ocean waters.

On November 24, 2008, the Moderate Resolution Imaging Spectroradiometer (MODIS) on NASA’s Terra satellite captured this image of northern Oman. In contrast to the orange-tinted sands in the west, the mountains of northern Oman range in color from pale beige to deep green-brown. The region’s mountain peaks consist primarily of Cretaceous limestone—originally formed from sediments laid down deep underwater at the time of the last dinosaurs. Igneous rocks (formed from magma) and metamorphic rocks (changed by intense heat and/or pressure) also occur in these mountains. Northeastern Oman’s mountains form an arc that roughly mimics the shape of the coastline. Jabal Shams, estimated at 2,980 meters (9,777 feet) above sea level, is the country’s highest point. From the highest peaks, the land gradually slopes down to sea level. The capital city of Masqat (or Muscat) rests just slightly above sea level.

In contrast to the desert environment in the south, the mountains of northeastern Oman regularly receive precipitation, including fierce electrical storms and snow, from December to March. Temperatures rise between April and September, but Indian Monsoon winds can also bring the occasional thunderstorm. The limestone cliffs of this region support rich soils that give rise to varied vegetation. Plant species change with elevation, and the greatest species diversity appears in the altitude range between 1,000 and 1,500 meters (3,280 and 4,920 feet).

The northernmost part of Oman is separated from the rest of the country by the United Arab Emirates. This northernmost part of Oman occupies the Musandam Peninsula, which offers tourists no sandy beaches. Instead, mariners must carefully negotiate cliffs and steep slopes that shoot out of the water to elevations of roughly 900 to 1,200 meters (3,000 to 4,000 feet). As if mirroring the mountains of the north, the mountains of southern Oman are similarly rugged.