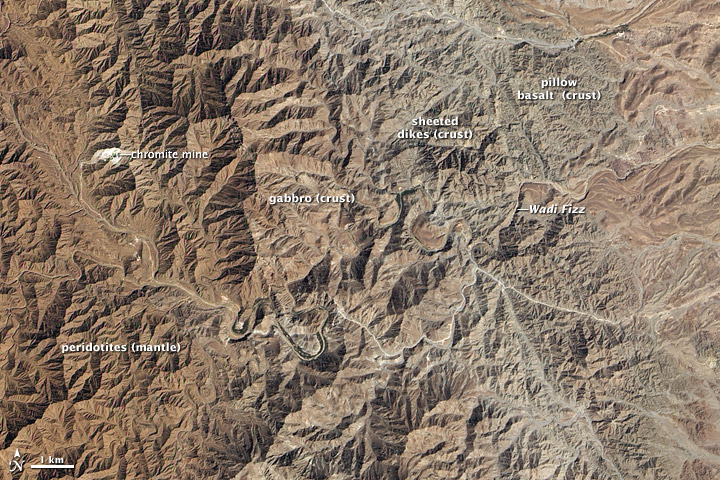 The mountains of northeastern Oman are rugged, dry, and as much as 2,500 meters (8,200 feet) above sea level. Yet millions of years ago, parts of these mountains were at the bottom of the sea. Actually, they were beneath it.

The landscape is known to geologists as the Semail (or Samail) ophiolite, and it holds evidence of the creative and destructive forces that shape our planet. The rocks exposed in the Oman Mountains used to lie in Earth’s interior, at the boundary between crust and the mantle, but when the ancient Tethys Ocean narrowed and closed, the forces that squeezed the Tethys also thrust the ancient seafloor skyward.

Ophiolite refers to a landform where ancient oceanic crust now sits at the land surface. The Advanced Land Imager (ALI) on NASA’s Earth Observing-1 (EO-1) satellite captured this natural-color image of a portion of the Semail ophiolite on March 6, 2012. The image centers on Wadi Fizz, the site of some chromite deposits of interest to miners and manufacturers.

The different rock types that comprise the Semail ophiolite sequence are visible in this image. From west to east (left to right), the rocks go from deepest within the earth to rocks that were originally exposed on the ocean floor. At the far left are peridodites that were once part of the Earth’s mantle. The upper part of this sequence was along the boundary with the base of the crust, and is where chromite is now mined. The next layer of rocks (the first in the crust, rather than the mantle) is composed of gabbro. Further east is a layer of sheeted dikes—lavas that were extruded into the crust, but solidified before reaching the surface—topped by basalt pillow lavas (which solidified in deep water).

Other satellite sensors have been used to survey Wadi Fizz. A study published in 2012 examined the capabilities of the Thematic Mapper on the Landsat satellites and the Advanced Spaceborne Thermal Emission and Reflection Radiometer on NASA’s Terra satellite to detect chromite-rich zones.