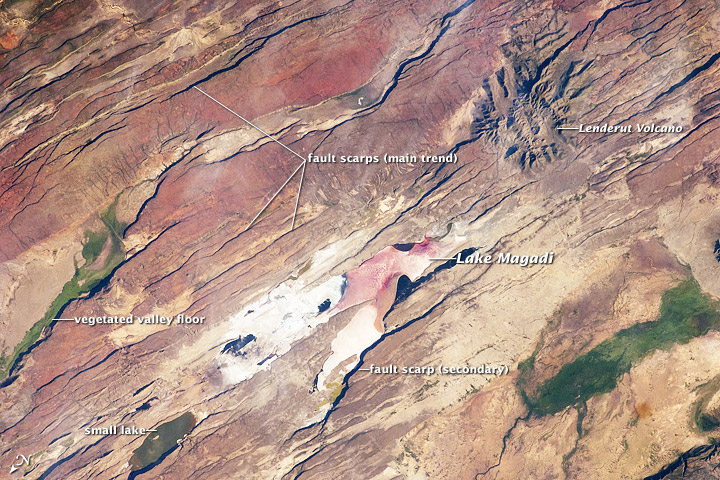 The East African Rift is one of the great tectonic features of Africa, caused by fracturing of the Earth’s crust. This astronaut photograph of the Eastern Branch of the Rift (near Kenya’s southern border) highlights the classical geologic structures associated with a tectonic rift valley.

On one side of the rift lies the Nubian (or African) tectonic plate, which includes the older continental crust of Africa. The Somalian plate—which is moving away in the other direction—lies to the other side and includes the Horn of Africa. (Note that the image is oriented so that north is to the lower left.) Together with the associated Ethiopian Rift, the tectonic boundary stretches from the southern Red Sea to central Mozambique.

Landscapes in the rift valley can appear confusing. The most striking features in this view are the numerous, nearly parallel, linear fault lines that occupy the floor of the valley. Shadows cast by the late afternoon Sun make the fault scarps more prominent. These steps in the landscape are caused by slip motion along individual faults and are aligned with the north-south axis of the valley (lower left to top right). A secondary trend of less linear faults cuts the main fault at an acute angle, with the fault steps throwing large shadows.

The Eastern Branch of the East African Rift is arid. (By contrast, the Western Branch lies on the border of the Congolese rainforest). Evidence of this can be seen in the red, salt-loving algae of the shallow and salty Lake Magadi (image center). A neighboring small lake to the north (to the left of Magadi in the image) has deeper water and appears dark. The white salt deposits on the dry part of the Lake Magadi floor host a few small commercial salt pans. The lakes appear to be located where the main and secondary fault trends intersect.

The East African rift system is marked by substantial volcanic activity, including lavas erupted from fissures along the rift in the region. Much of the faulting observed in this image cuts through such lavas. Elsewhere along the rift system, individual volcanoes form. Some of those volcanoes are very large, including Mount Kilimanjaro and Mount Kenya. In this image, a volcano (Lenderut) appears to be superimposed on the faults, indicating that it is younger than the faults it covers. Deeply eroded slopes also suggest that the volcano has not been active for a long time.

The largest vegetated area is the green floor of a valley that drains an area large enough for water to exist near the surface. For a sense of scale, the vegetated valley floor is 17 kilometers long (10.5 miles).

Astronaut photograph ISS030-E-35487 was acquired on January 14, 2012, with a Nikon D2Xs digital camera using a 1800 mm lens, and is provided by the ISS Crew Earth Observations experiment and Image Science & Analysis Laboratory, Johnson Space Center. The image was taken by the Expedition 30 crew. The image has been cropped and enhanced to improve contrast, and lens artifacts have been removed. The International Space Station Program supports the laboratory as part of the ISS National Lab to help astronauts take pictures of Earth that will be of the greatest value to scientists and the public, and to make those images freely available on the Internet. Additional images taken by astronauts and cosmonauts can be viewed at the NASA/JSC Gateway to Astronaut Photography of Earth. Caption by M. Justin Wilkinson, Jacobs/ESCG at NASA-JSC. 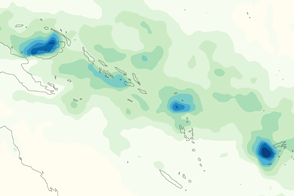