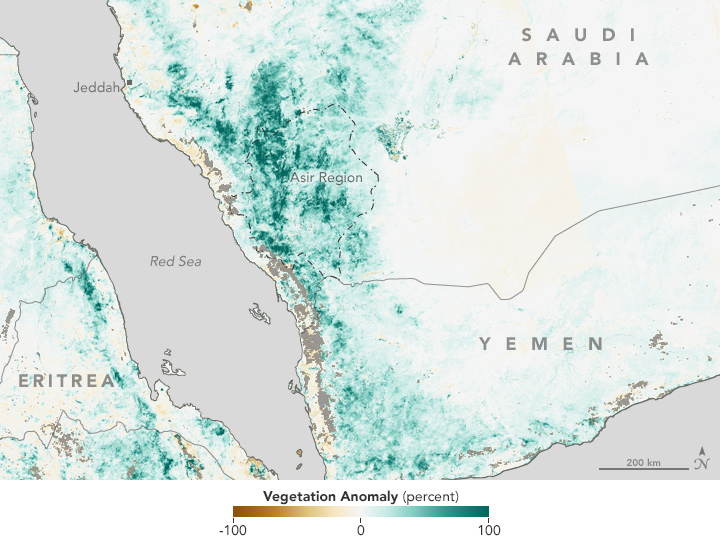 Outbreaks of the mosquito-borne Rift Valley fever most often show up in eastern and southern Africa. But in 2000, an outbreak was confirmed for the first time along the western Arabian Peninsula; it killed more than 160 people and led to large losses of livestock. Now in 2016, conditions appear primed for another outbreak along coastal areas of Saudi Arabia and Yemen.

Rift Valley fever predominantly affects domesticated animals (particularly livestock). When the virus infects humans, the symptoms are usually mild (flu-like fever, muscle pain, joint pain, and headache). But in 8 to 10 percent of people, the infection can lead to blindness, hemorrhagic fever, or death.

The disease usually shows up after periods of widespread, heavy, and above-normal amounts of rainfall. Water accumulates in low-lying areas called dambos, or in agricultural wetlands along the Red Sea coast, providing habitat for disease-carrying mosquitoes to reproduce. The same conditions that promote the disease also make it easier to identify when and where conditions are suitable for an outbreak.

The map above shows NDVI anomalies based on data from the Moderate Resolution Imaging Spectroradiometer (MODIS) instrument on NASA’s Aqua satellite. The map contrasts vegetation greenness from May 8-15, 2016, against the long-term average for that period from 2003–2011. Greens indicate vegetation that is more widespread or abundant than normal. Brown areas show plant growth that was below normal, and dark grays depict areas where data were not available, usually due to cloud cover.

“There has been a lot of rain showing up in the vegetation index over the same regions that were affected by the 2000 outbreak,” said Assaf Anyamba, a remote sensing scientist with the NASA Goddard Earth Sciences Technology Center. “The current NDVI anomalies are the highest in the past 14 years. It may be worth finding out what may be going on the ground with respect to flooding and the emergence of different vector species. The landscape seems primed.”

The chart above shows the eight-day average of NDVI in the Asir region of Saudi Arabia. From mid-April to mid-May 2016 (dark green), NDVI soared far above normal (black). For comparison, the light green line shows that NDVI was also above normal from 2006-2007 during the last El Niño period. “We would expect an outbreak to occur in the next 1-2 months if there is no vaccination and if no mosquito control is undertaken,” Anyamba said.

“I agree that conditions are conducive to an outbreak, especially if Rift Valley fever is introduced into areas where animals are not vaccinated,” said Kenneth Linthicum, director of the USDA-Center for Medical, Agricultural & Veterinary Entomology.

The virus can be introduced to the Arabian Peninsula from animals that move from infected regions of continental Africa. And as the map shows, NDVI is high there as well. “Areas of continental Africa also appear to be at elevated risk and have been over the past 6–9 months,” Linthicum said.

But just because conditions are primed does not mean there will be an outbreak. Vector surveillance and control, and early livestock vaccination, can prevent outbreaks where they are likely to occur.

Such steps have previously been shown to be effective in Kenya. “The outbreak warnings produced by this project at the end of 2015 for Kenya were heeded,” Linthicum said. “They resulted in mass vaccinations by the government of Kenya to animals in at-risk areas, and likely prevented a Rift Valley fever outbreak for the first time in history.”