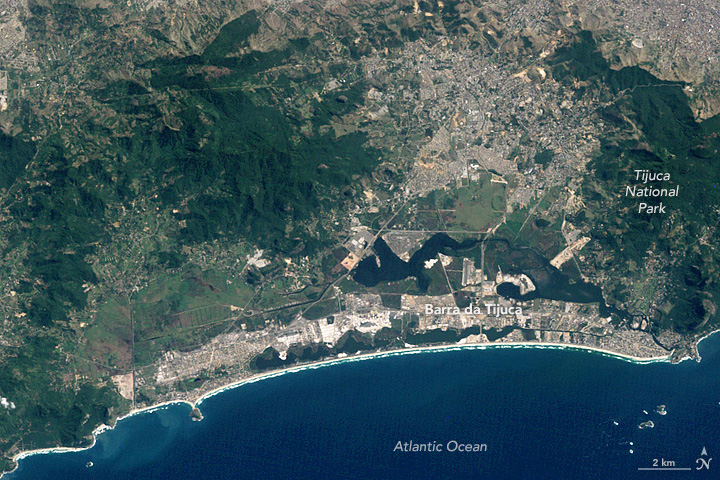 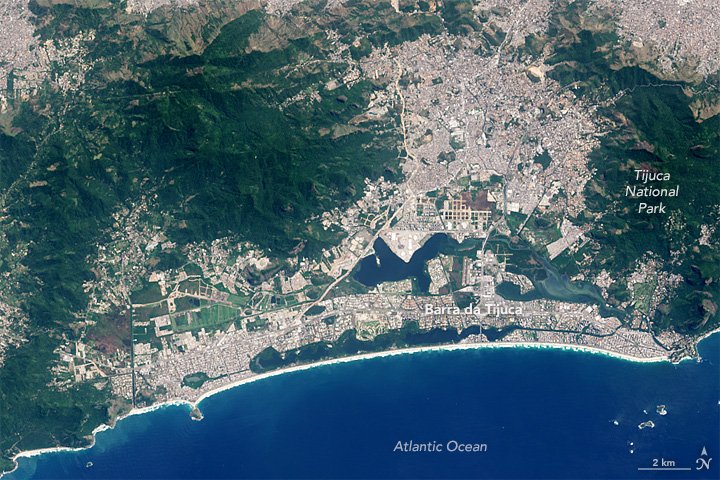 To accommodate those visitors, billions of dollars have been spent upgrading and building infrastructure, reducing crime, and addressing environmental issues. While Olympic venues are located in several neighborhoods, most events will occur in Barra da Tijuca, a coastal neighborhood in the city’s West Zone.

Barra da Tijuca is one of the youngest and most affluent neighborhoods in Rio; it is also the fastest growing. Between 1990 and 2010, the population increased threefold from 100,000 to 300,000. Many people were drawn to the neighborhood by its easy access to an 18-kilometer (11-mile) beach, the longest in Rio, and a large shopping mall. The neighborhood is also home to Barra Olympic Park, a triangular tract of land near Lake Jacarepagua with seven sporting venues, including facilities for swimming, tennis, basketball, and gymnastics.

Natural-color imagery collected by Landsat satellites show how Barra da Tijuca and the West Zone have changed since the 1980s. The upper image was acquired by the Thematic Mapper on Landsat 5 on September 19, 1984; the lower image was acquired by the Operational Land Imager on Landsat 8 on September 25, 2015. Forested areas are green; urbanized areas are gray. Turn on the image-comparison tool to see how the region has changed.

NASA recently signed an agreement with the Rio De Janeiro mayor’s office to support efforts to better understand, anticipate, and monitor natural hazards like drought, flooding, and landslides in and around the city. The collaboration will leverage NASA’s satellite data systems and Rio de Janeiro’s ground-based monitoring and crisis-management capabilities to improve hazard monitoring and disaster response.