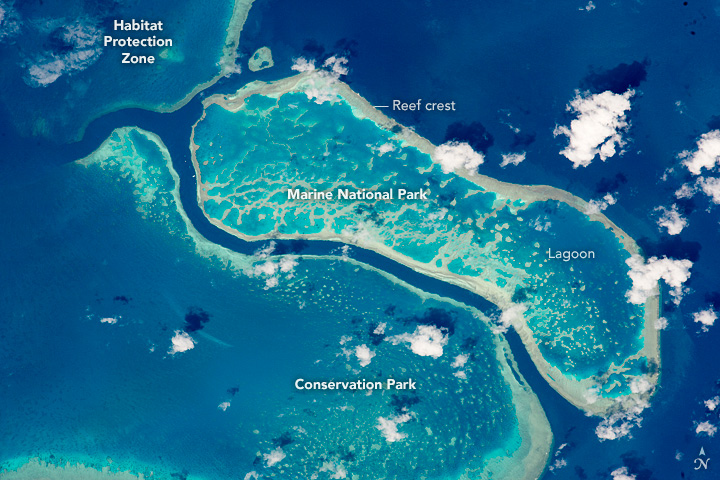 An astronaut aboard the International Space Station used a powerful lens to photograph these three reefs in Australia’s Great Barrier Reef. The photo area spans about 15 kilometers (10 miles) of the 2300-kilometer (1,700 mile) reef system. Reefs are easy to spot from space because the iridescent blues of shallow lagoons contrast sharply with the dark blues of deep water.

The Great Barrier Reef is the largest reef system on Earth, with more than 3,000 separate reefs and coral cays. It is also one of the most complex natural ecosystems, with 600 types of corals and thousands of animal species from tiny planktons to whales.

Corals look like plants, but are in fact colonies of very small animals known as coral polyps—closely related to jellyfish. The color differences in the photo relate to different habitats for coral growth; that is, the habitats strongly relate to two sources of energy and nutrients.

Agitated water—as in the surface zone, where waves break against the reef—provides more plankton nutrients than still water, especially for reefs like these that lie far from land sources of nutrients (75 kilometers or 45 miles from the Queensland coastline). The best-developed reef crests face the open ocean (image right) for this reason. The dark, narrow channels between the lagoons also allow deeper, nutrient-rich water to reach the reef-crest corals. But waves are also destructive, so only robust types of coral live within the breaker zone.

The other source of energy is the Sun, which is needed by symbiotic, single-cell organisms that provide most of the nutrients for coral growth. The dark blues in the image are zones where too little light penetrates the water. Tropical corals disappear where the light fades away: about 60 meters (200 feet) below the sea surface. By contrast, the shallow water within the lagoons has the strongest light supply and displays numerous patches of coral. Although lagoons are protected from the full force of waves, they lack the plankton supply from constant wave agitation. This limits the amount of living coral within the lagoon, as seen in the empty zones. But the lagoons have so many microhabitats that they boast the greatest number of species in the reef ecosystem—with mollusks, worms, and crustaceans often dominating the visible fauna.

The Great Barrier Reef is now protected in a marine park. The three reefs captured here—part of the planning area for the Whitsunday group of islands, which are 900 kilometers (560 miles) north of Brisbane in Queensland—have different types of protected status. The reef at top left is a habitat protection zone, controlling potentially damaging activities such as trawling. The reef on the lower left is a conservation park, which has limited fishing. The reef at the center of the image is a marine national park, with no fishing or collecting.

Astronaut photograph ISS045-E-56257 was acquired on October 12, 2015, with a Nikon D4 digital camera using an 1150 millimeter lens, and is provided by the ISS Crew Earth Observations Facility and the Earth Science and Remote Sensing Unit, Johnson Space Center. The image was taken by a member of the Expedition 45 crew. The image has been cropped and enhanced to improve contrast, and lens artifacts have been removed. The International Space Station Program supports the laboratory as part of the ISS National Lab to help astronauts take pictures of Earth that will be of the greatest value to scientists and the public, and to make those images freely available on the Internet. Additional images taken by astronauts and cosmonauts can be viewed at the NASA/JSC Gateway to Astronaut Photography of Earth. Caption by M. Justin Wilkinson, Texas State U., Jacobs Contract at NASA-JSC.