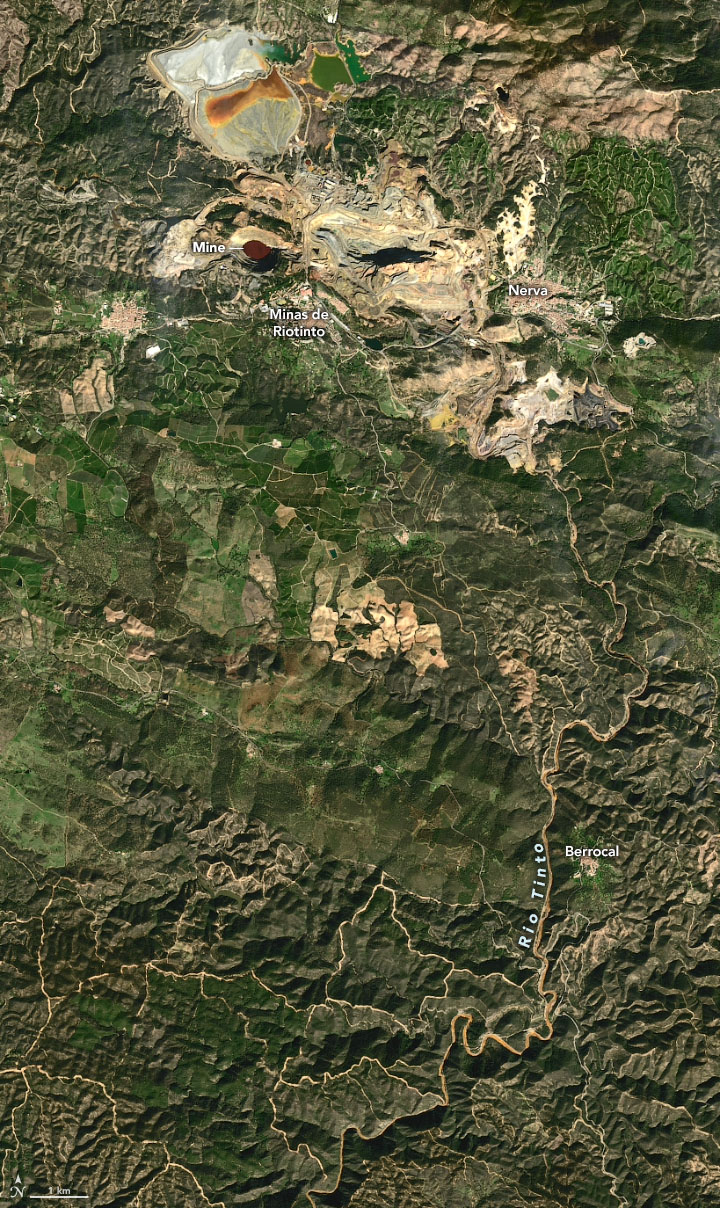 For tens of kilometers in southwestern Spain, the Rio Tinto runs a remarkable shade of red. The Operational Land Imager (OLI) on Landsat 8 acquired this image of one colorful section of the river on February 2, 2020.

The Rio Tinto, which means “stained river” in Spanish, flows through an area unusually rich with sulfide ore deposits, which formed hundreds of millions of years ago when volcanoes were active in the area. When the metals in these buried deposits are exposed to water and oxygen, they produce acidic runoff that flows into streams and rivers.

While the acid has made the Rio Tinto inhospitable to most types of life, it has made it more hospitable to sulfide-consuming bacteria and other extremophiles that amplify the acidification process. These organisms give the river its red hue by producing ferric iron, a rust-colored substance. The combined effects of the chemical weathering of rocks and bacterial activity in the water have caused the average pH of the river to drop as low as 2, roughly the same as vinegar.

Thousands of years of mining in the region have probably amplified the natural acidification processes by increasing the amount of exposed sulfide ore. People have sporadically mined in the area for 5,000 years, and the region is known among archaeologists as a key site during the Copper and Bronze Ages. Mining in the region continues today: After being temporarily decommissioned in 2001, the modern mine (image above) resumed production of copper in 2016.

Astrobiologists have a keen interest in the Rio Tinto and its surrounding area because the region’s soils have similarities to those on Mars. Notably, the iron- and potassium-rich sulfate mineral jarosite is common around the river and on the Red Planet. Since the jarosite and other minerals present in this part of Spain often contain signatures of bacterial activity, astrobiologists think studying how extremophiles live in and around the Rio Tinto may offer clues about how to search for evidence of life on Mars.

This astronaut photo from January 4, 2010, shows meander scars and oxbow lakes in the floodplain of the Rio Negro in South America.