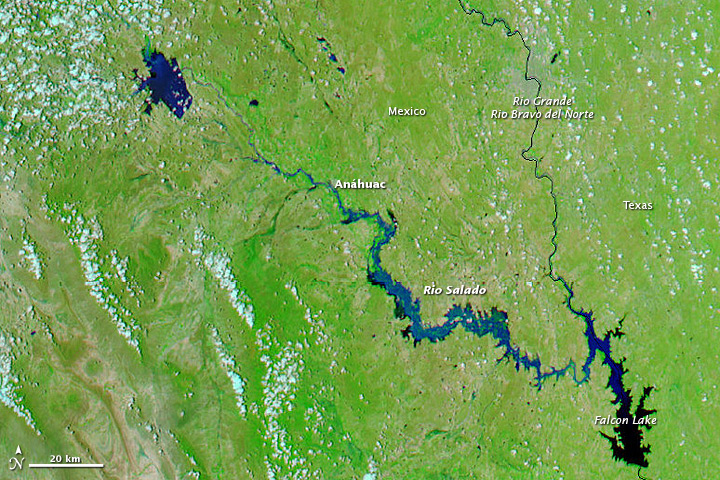 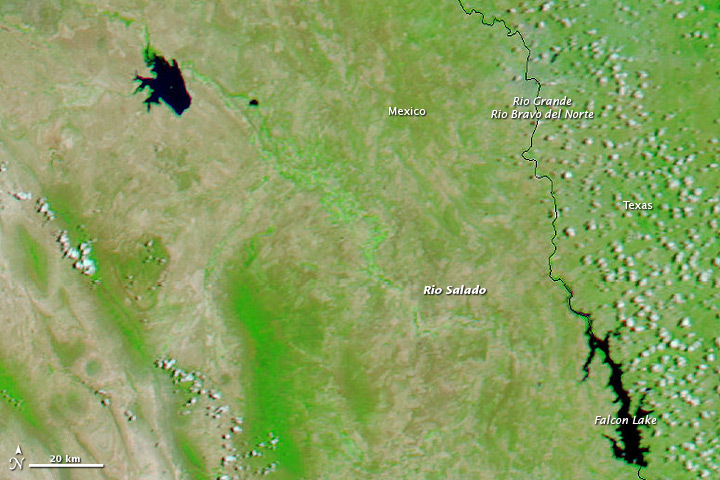 Heavy rains from Hurricane Alex flooded rivers in northern Mexico, including the Rio Salado and Rio Grande. Hoping to avoid a catastrophic flood, authorities opened the floodgates of a major dam on the Rio Salado, and the extra water flooded the city of Anáhuac. Major flooding also occurred downstream from that community.

The Moderate Resolution Imaging Spectroradiometer (MODIS) on NASA’s Aqua satellite captured these images on July 11, 2010 (top), and June 21, 2010 (bottom). They show the region where the Rio Salado joins the Rio Grande. Both images use a combination of infrared and visible light to increase the contrast between water and land. Water and water-saturated areas vary in color from navy to electric blue. Vegetation is green, bare ground is beige, and clouds are pale blue-green.

In the image from June 21, the Rio Salado is barely discernible; only the river valley’s vegetation betrays the Rio Salado’s path. On July 11, however, water is visible along the entire course of the river. The swollen Rio Salado is most dramatic southeast of Anáhuac.

Heavy rains from Hurricane Alex pushed a dam to capacity in northern Mexico in early July 2010. Authorities opened floodgates on the dam, flooding a community downstream.