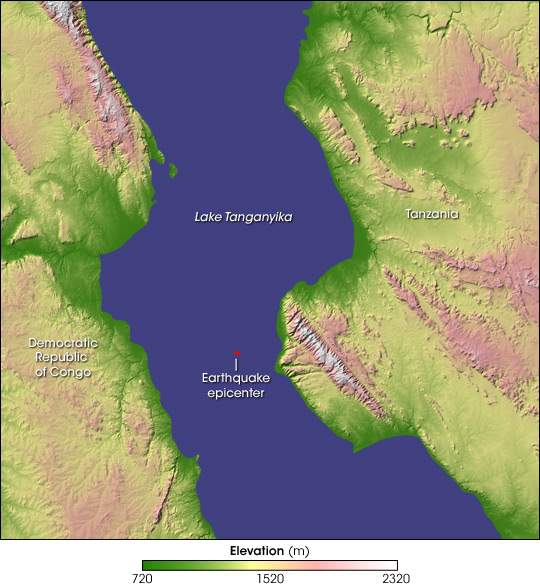 A strong earthquake rattled East Africa on December 5, 2005. Measuring 6.8 on the Richter scale, the earthquake was centered under Lake Tanganyika, the oldest and deepest of the Rift Valley lakes, and was felt as far away as Nairobi, the capital of Kenya some 975 kilometers (600 miles) from the epicenter.

Though the region has been relatively quiet in recent years, the same forces that shook eastern Africa in December 2005 also carved out Lake Tanganyika and the surrounding landscape. The lake lies along the western edge of the Great Rift Valley, a 5,000-kilometer-long geologic feature that runs north-south from Lebanon to Mozambique. The Great Rift is being created as the Arabian, Nubian, and Somalian tectonic plates move apart, stretching and thinning the Earth’s crust as they do. The result is a long chain of depressions, valleys, and deep lakes alongside towering volcanoes like Mount Kilimanjaro and steep mountains. The volcanoes form as magma pushes its way through the thinned crust. Volcanic tremors and the forces that are pulling the plates apart combine to break the weakened and thinned crust into earthquake-generating faults. When the faults slip, one side rises while the other falls. Over time, steep mountains form along one side of the fault. As a result, Africa’s tallest mountains line the Great Rift.

The complex topography of the Great Rift around Lake Tanganyika is shown in this image, created using data from the Shuttle Radar Topography Mission. The lake is hemmed in by mountains, shown in white and pink, that run parallel with its shores. The mountains and the lake are all oriented northwest to southeast along the boundary of the Somalian and Nubian plates. The most dramatic elevation change—not visible in this image—is beneath the surface of the lake. Offshore, Lake Tanganyika plunges to a depth of 1,470 meters, making it the second deepest lake in the world, after Lake Baikal. If the geologic forces that created Lake Tanganyika continue, eastern Africa will eventually break away from the rest of Africa and the Great Rift Valley will become ocean.