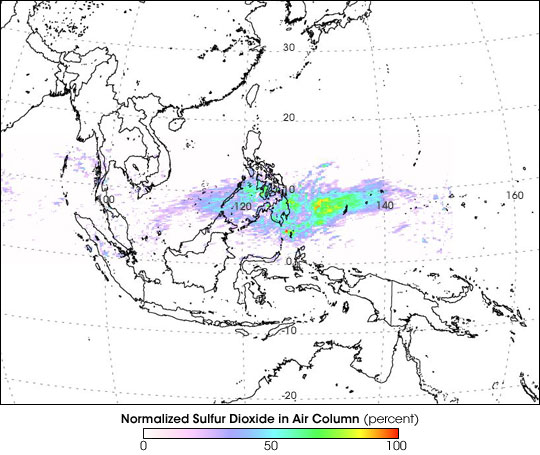 On May 20, 2006, the Soufriere Hills Volcano, on the Caribbean island of Montserrat, erupted. After months of releasing intermittent volcanic plumes, the volcano heightened its activity with a dome collapse and the release of a volcanic plume that suspended air traffic in the region. In addition to volcanic ash, the plume contained sulfur dioxide, and because the plume reached an altitude of 20 kilometers, entering Earth’s stratosphere, the Ozone Monitoring Instrument (OMI) on NASA’s Aura satellite was able to collect measurements of the sulfur dioxide as it traveled halfway around the world (see animation). OMI tracked the cloud from May 20 to June 11, 2006.

This image shows the sulfur dioxide cloud passing over the Philippine Islands on its journey westward. From its starting point in the Caribbean, the cloud crossed the Pacific, spreading out to several hundred kilometers in length as it moved. By the time it reached the Indian Ocean, not long after this picture was taken, the cloud dissipated so much that OMI could no longer track it. This image shows sulfur dioxide concentrations in each image pixel as a percentage of the maximum concentration observed anywhere in the image on May 20. Red indicates that an area reached 100 percent of the maximum value observed anywhere that day, white indicates 0 percent, and turquoise indicates 50 percent. Expressing the concentrations as a percent of the highest level observed is known as normalizing.

Sulfur dioxide results from volcanic emissions, as well as the burning of some fossil fuels. Potential hazards from high concentrations of this gas range from breathing impairment to limited visibility and acid rain. Sulfur dioxide eventually turns into sulfate aerosol particles, which are very bright and can reflect incoming sunlight. Large, violent eruptions can send sulfur dioxide high into the Earth's atmosphere. The resulting sulfate aerosols can linger for several years and cool the climate.