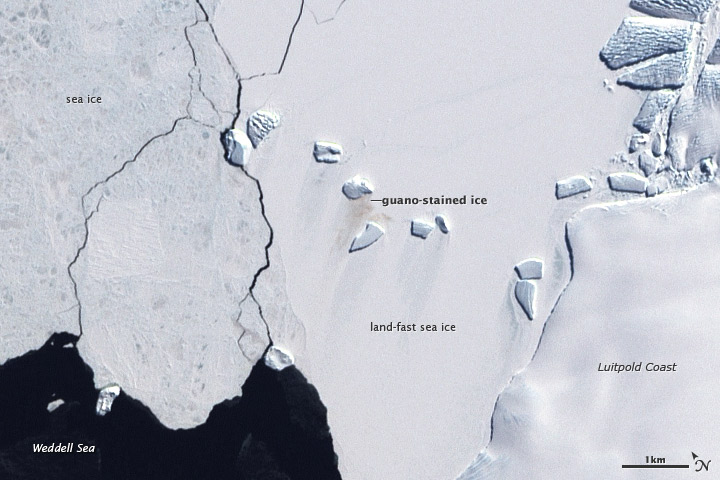 Despite being the world’s biggest penguins, Antarctica’s emperor penguins (Aptenodytes forsteri) are in some ways the most vulnerable. Unlike their littler cousins, such as Adélie penguins that breed on land, emperor penguins breed almost entirely on sea ice. If the spring thaw comes early to the birds’ nesting platform, stranded penguin chicks may starve. The vulnerability of emperor penguins to natural variability in the timing of the spring thaw makes them important research subjects for wildlife biologists, but they breed in some of the coldest, darkest, remotest parts of the world, often in colonies far too big for scientists to manually count. Researchers at the British Antarctic Survey (BAS), however, found an ingenious solution. Rather than looking for penguins, the BAS team used satellite imagery to find what penguins leave behind.

This true-color image, acquired by the Enhanced Thematic Mapper Plus on NASA’s Landsat 7 satellite on December 4, 2002, shows part of Antarctica’s Luitpold Coast, roughly 77.3 degrees south and 33.7 degrees west, just east of the Filchner Ice Shelf. Immediately off the coast is an expanse of land-fast sea ice—sea ice frozen to the coast. Northwest of that is thinner, less permanent sea ice. The raised areas of ice within the land-fast sea ice are icebergs that likely broke off a large slab of land-based ice and drifted seaward before encountering shoals that held them in place.

On the land-fast sea ice, in between two icebergs, is a light brown stain. Land-based ice, such as glaciers, can contain dirt or other debris that discolors it. Sea ice, however, has no excuse for such a stain. In this part of the world, only one thing can turn so much once-pristine ice brown: bird guano. In fact, the BAS researchers explained, looking for guano stains is more reliable than looking for actual penguins since the birds’ tuxedo colors might simply blend in with the shadows on the ice. By locating penguin droppings, the BAS team identified 38 emperor penguin colonies along the Antarctic coast. Although some breeding colonies occur on more ephemeral sea ice, many breeding grounds occur on semi-permanent, land-fast sea ice, which is the case here.

Scientists studying emperor penguins had long assumed, based partly on decades-old data, that Antarctica supported 34 emperor penguin colonies. The BAS study, published in June 2009, listed ten new colonies and six moved colonies. In addition, the researchers found that six colonies earlier thought to exist on Antarctic sea ice had either disappeared or had not existed in the first place. Earlier studies had suggested that breeding colonies north of 70 degrees south might not be viable in light of expected climate change, and the BAS study located 16 breeding colonies north of that latitude. Although Southern Hemisphere sea ice has not declined to date (despite wide fluctuations, it has increased slightly since 1979), global warming is expected to eventually affect Antarctic sea ice. Early thaws may become more common. The BAS researchers stressed, however, that further studies would be necessary to predict the overall emperor penguin population trajectory.

To carry out their study, the BAS researchers relied primarily on the Landsat Image Mosaic of Antarctica (LIMA), which is composed of images of the continent from 1999 through 2003. Because breeding colonies only exist during certain months, the BAS researchers took care to use imagery from those and not other months. Where necessary, the BAS team supplemented the LIMA imagery with observations from other satellites.

NASA image by Robert Simmon, based on Landsat 7 data from the USGS Global Visualization Viewer. Caption by Michon Scott.