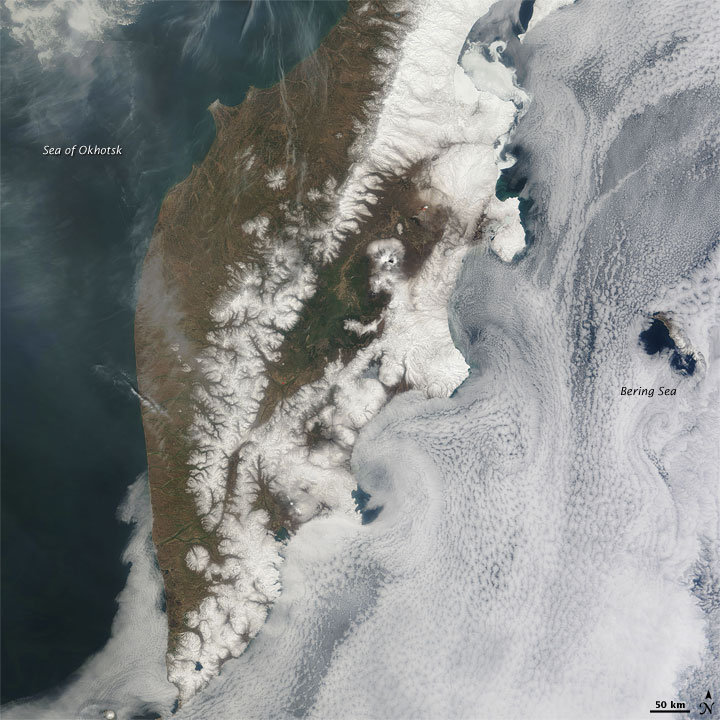 Clouds hugged the east coast of Russia’s Kamchatka Peninsula while skies inland remained clear at the end of May 2009. The clear skies revealed a landscape thawing out from winter’s chill. The Moderate Resolution Imaging Spectroradiometer (MODIS) on NASA’s Terra satellite captured this photo-like image of the peninsula on May 31, 2009.

Neatly skirting the peninsula, the clouds over the Bering Sea and the southern part of the Sea of Okhotsk present a textured landscape of their own. Arcs of clouds push up against the coastline, fanning out along the shore. Rather than showing a uniform thickness, the clouds vary from opaque to almost transparent, with a few areas of clear skies revealing deep blue ocean water.

On the peninsula, brown-green land surrounds what remains of the snow cover. Whereas the peninsula is typically coated with snow in the wintertime, the snow retreats in the springtime to coat just the slopes of mountains and volcanoes. Part of the Pacific Ring of Fire, Kamchatka boasts more than 100 volcanoes, with roughly a dozen volcanoes sporting active vents. Among the more active volcanoes on Kamchatka are Shiveluch, Klyuchevskaya, Bezymianny, and Karymsky. 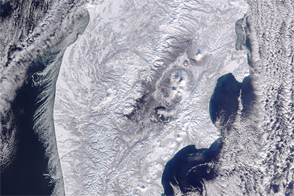 The remote Russian peninsula was covered in snow and unobscured by clouds. 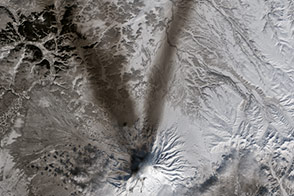 “V” is for Volcano

Ash paints the snow to the northwest and northeast of Russia’s Shiveluch volcano.