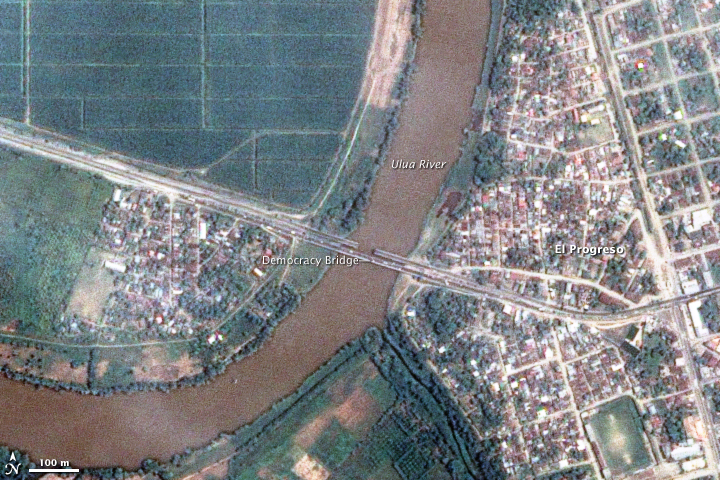 The Honduran city of El Progreso was among the cities most affected when a magnitude 7.3 earthquake rattled Central America on May 28, 2009. The powerful earthquake killed at least 6, injured 25, and destroyed houses and public buildings throughout Honduras, said the International Federation of Red Cross and Red Crescent Societies. The earthquake also collapsed a span of the Democracy Bridge, the bridge leading out of El Progreso over the Ulua River.

Taiwan’s Formosat-2 satellite captured this photo-like image of the earthquake-damaged bridge the day after the quake, on May 29, 2009. A gap is clearly visible in the central section of the northern span of the bridge. The Democracy Bridge was one of two that were destroyed in the quake, said the Red Cross.

According to the United States Geological Survey, the earthquake occurred on the Swan Islands Transform Fault in the Cayman Trench, a deep underwater canyon along the boundary between the North American and Caribbean Plates. For a map of the region’s topography and fault systems, see 7.3-Magnitude Quake off the Honduras Coast.

7.3 Magnitude Quake off the Honduras Coast