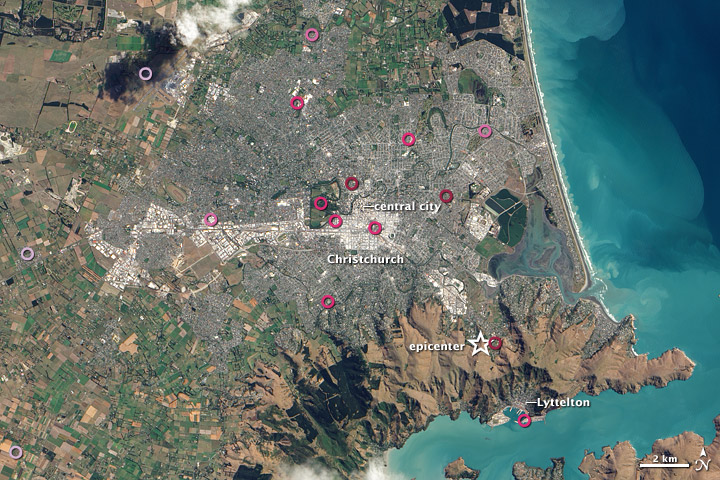 It is a modern human tendency to focus on the number of an earthquake—specifically, the magnitude, or what people used to call the “Richter scale.” But the destruction from a quake usually has more to do with location and timing. Such was the case with the earthquake in Christchurch, New Zealand, on February 22, 2011.

A September 2010 earthquake centered 40 kilometers (25 miles) west of Christchurch, in the plains near Darfield, struck at 4:35 a.m., had a magnitude of 7.1, and caused some structural damage and one death (by heart attack). The earthquake in February 2011 occurred at 12:51 p.m. and just 10 kilometers (6 miles) from the center of Christchurch. It had a magnitude of 6.3, though was officially classified—scientifically speaking—as an aftershock of the 2010 quake. At least 166 people died, and the city of Christchurch was devastated structurally and emotionally. Many people are still missing.

The natural-color image above was captured on March 4, 2011, by the Advanced Land Imager (ALI) on NASA’s Earth Observing-1 (EO-1) satellite. Overlain on the map are seismological measurements of the ground shaking in the Christchurch area on February 22, as noted by the U.S. Geological Survey's Earthquake Hazard Program.

The deeper the red color of the circle, the more intense the “peak ground acceleration,” or shaking of the earth. Note how intensity is highest right around the most densely developed areas of Christchurch. City officials and news accounts also described liquefaction—the softening and loosening of the soil due to shaking and groundwater penetration—that was 300 to 500 percent worse than during the September 2010 earthquake.

There are two forms of energy that cause the shaking in an earthquake. “P” or primary waves provide the initial, often vertical, jolt that lifts people and structures off the ground. “S” or secondary waves lead to horizontal shaking. Most structures collapse during the longer-duration S waves because buildings are not designed to handle this side-to-side motion. In Christchurch, the quake occurred so close by that the lag between P and S waves was a mere second.