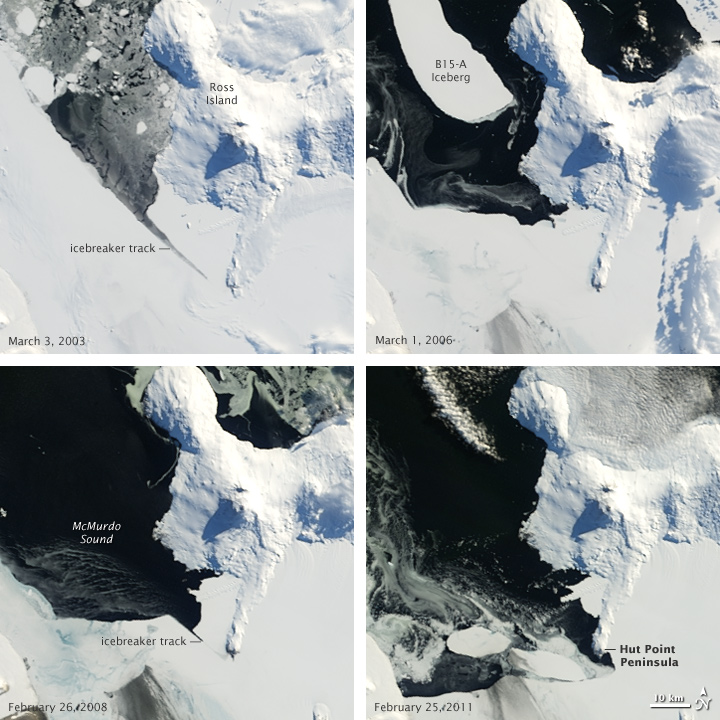 Early in February 1902, Captain Robert Falcon Scott sailed into McMurdo Sound and docked his ship, the Discovery, in a small, sheltered bay at the tip of a rocky peninsula on Ross Island. Eager to begin a year exploring one of Earth’s last untouched places, Scott and his men immediately set to work building a hut to serve as the base for the 47 men on the expedition. The peninsula became Hut Point Peninsula. While the men were taking scientific measurements and scouting the alien landscape, sea ice formed over McMurdo Sound, trapping the Discovery. The following summer, Scott discovered that sea ice around Hut Point Peninsula does not disappear every year.

In fact, if Scott had made his expedition in 1998, he would only now be free. In 2011, sea ice in McMurdo Sound reached its lowest extent since 1998, reported the United States Antarctic Program. It is the first time that the Moderate Resolution Imaging Spectroradiometer (MODIS) sensor, which launched on NASA’s Terra satellite in late 1999, has seen the tip of Hut Point Peninsula free of ice.

Sea ice in McMurdo Sound fluctuates from year to year based on local currents and weather patterns. For much of the past decade (shown in the animation), the giant B-15 iceberg altered currents and trapped sea ice in McMurdo Sound. Sea ice still clogged the Sound when MODIS acquired the top left image on March 3, 2003. The iceberg broke apart in 2005, and the largest piece is visible in the 2006 image. Though the Sound was clearer in 2006, Hut Point Peninsula was still solidly encased. From 2008 through 2010, late-summer sea ice around Hut Point Peninsula changed very little. In the final image in the series, from February 25, 2011, the point of the peninsula is surrounded by open water.

Scott’s party and crews from two relief ships spent weeks trying to free the Discovery without much luck, leading Scott to record, “I fear, I much fear, things are going badly for us.” Then, currents shifted and the ice began to break away. On February 14, 1904, Scott climbed a mountain behind the hut and reported:

The ice was breaking-up right across the strait, and with a rapidity which we had not thought possible. I have never witnessed a more impressive sight; the sun was low behind us, the surface of the ice-sheet in front was intensely white, and in contrast the distant sea and its forking leads looked almost black. The wind had fallen to a calm, and not a sound disturbed the stillness about us. Yet in the midst of this peaceful scene was an awful unseen urgency rending that great ice-sheet as though it had been naught but the thinnest paper...now without a word, without an effort on our part, it was all melting now, and we knew that in an hour or two not a vestige of it would be left, and that the open sea would be lapping on the black rocks of Hut Point.

Those who watched the ice break up in 2011 from the U.S. Antarctic program’s base, McMurdo Station or New Zealand’s Scott Base may have seen a similar scene. Both stations are near the Discovery hut. Today, however, the need for a clear path to Hut Point is not so great since icebreaker ships can clear the way to the stations. The track of the icebreaker is visible in the 2003 and 2008 images.

Ironically, the breaking sea ice posed transportation problems for modern explorers at McMurdo Station in 2011. The ice broke enough that parts of Pegasus airfield had to be relocated just as scientists and crewmembers were leaving the station on airplanes at the end of the summer, said the U.S. Antarctic Program.