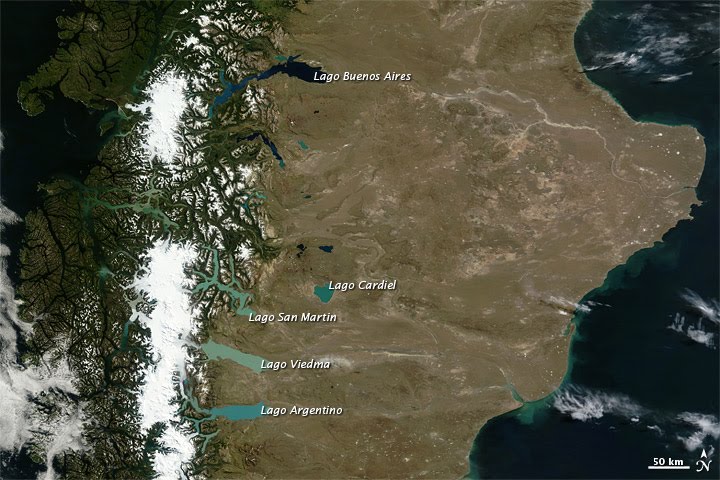 Painted with a broad brush, Patagonia appears in north-south stripes of green, white, and brown—reflecting three different types of landform. In the west lie the richly forested islands and peninsulas of Chile. In the middle—although closer to the west coast than the east—are the Andes, many of them capped by glaciers. A high, arid plain stretches east from the Andes.

But interrupting this simple color scheme are multiple shades of blue. Stretching to the east and west from the Andean glaciers are massive bodies of water. The Moderate Resolution Imaging Spectroradiometer (MODIS) on NASA’s Terra satellite captured this natural-color image of the lakes of Patagonia on February 19, 2011.

Most of the glacial lakes extend eastward onto the high plain. Like the lakes of the Qinghai-Tibet Plateau, these water bodies appear in multiple shades influenced by multiple factors, including depth and sediment content.

Lago Buenos Aires (also known as Lago General Carrera) is the darkest of the lakes, ranging in color from electric blue in the west to navy in the east. In the south, Lago Cardiel and Lago Argentino are lighter. Lago San Martin and Lago Viedma are the palest lakes, and bear the color characteristic of thick glacial flour. Like glaciers the world over, Andean glaciers have slowly pulverized the rocks below into fine-grained sediments. When pooled in glacial lakes, glacial (or rock) flour colors the water bright turquoise.

Patagonian glaciers have been grinding rocks into flour for at least a few million years. While most of us think of ice ages moving glaciers across North America, particularly during the Pleistocene, glaciers also have occasionally advanced in Patagonia as well.