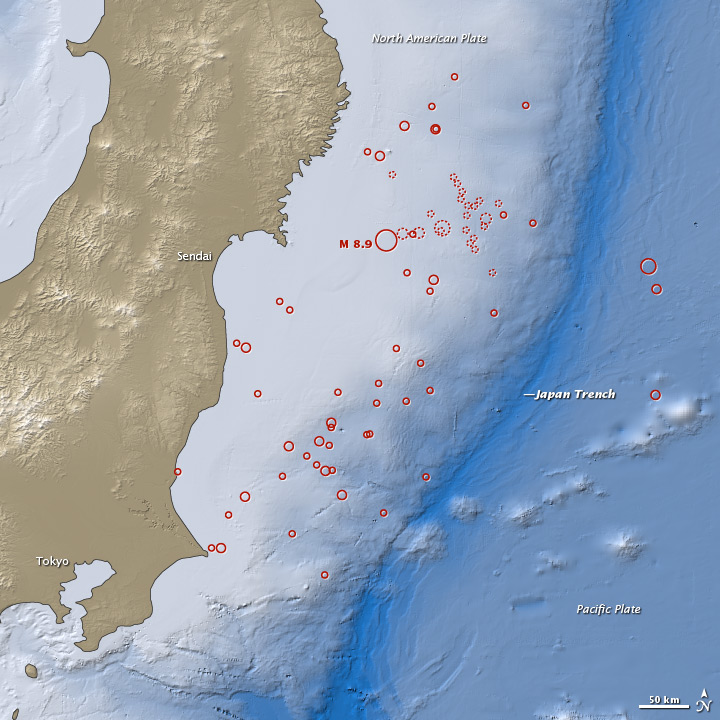 This map shows the location of the March 11 earthquake, as well as the foreshocks (dotted lines) and aftershocks (solid lines). The size of each circle represents the magnitude of the associated quake or shock. The map also includes land elevation data from NASA’s Shuttle Radar Topography Mission and ocean bathymetry data from the British Oceanographic Data Center.

According to the U.S. Geological Survey (USGS), the earthquake occurred at a depth of 24.4 kilometers (15.2 miles) beneath the seafloor. The March 11 earthquake was preceded by a series of large foreshocks on March 9, including an M7.2 event. USGS reported that the earthquakes “occurred as a result of thrust faulting on or near the subduction zone interface plate boundary.”

The March 11 quake sent tsunami waves rushing into the coast of Japan and rippling out across the entire Pacific basin. Crescent-shaped coasts and harbors, such as those near Sendai, can play a role in focusing the waves as they approach the shore. Also, since land elevation is low and flat along much of the Japanese coast, many areas are particularly vulnerable to tsunamis.