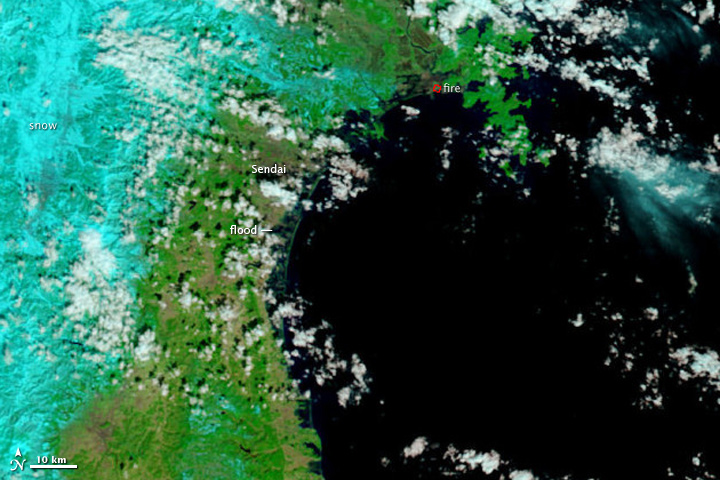 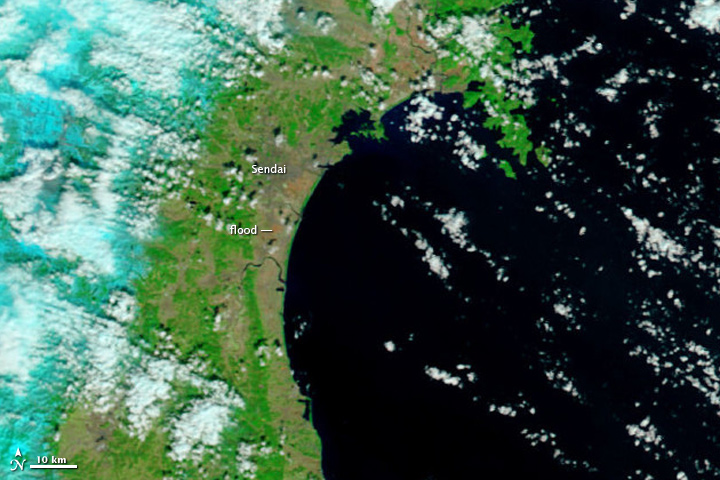 NASA’s Terra satellite’s first view of northeastern Japan in the wake of a devastating earthquake and tsunami reveal extensive flooding along the coast. The Moderate Resolution Imaging Spectroradiometer (MODIS) acquired the top image of the Sendai region on March 12, 2011, at 10:30 a.m. The lower image, taken by Terra MODIS on February 26, 2011, is provided as a point of reference.

Water is black or dark blue in these images. It is difficult to see the coastline in the March 12 image, but a thin green line outlines the shore. This green line is higher-elevation land that is above water, presumably preventing the flood of water from returning to the sea. The flood indicator on the lower image illustrates how far inland the flood extends.

Both images were made with infrared and visible light, a combination that increases the contrast between muddy water and land. Plant-covered land is green, while snow-covered land is pale blue. Clouds are white and pale blue. The paved surfaces in the city of Sendai colors it brown.

MODIS detected a fire burning near the shore north of Sendai. The fire is marked with a red box. It is also surrounded by floods.

The photo-like true-color image acquired a few hours later shows plumes of sediment washed into the ocean along the coast and a dark plume of smoke near Sendai. Both images are from the MODIS Rapid Response System, which provides twice-daily images of Japan.

Editor’s note: The MODIS image taken on March 13, after this image was published, provides a cloud-free view of the tsunami flooding in northeastern Japan.