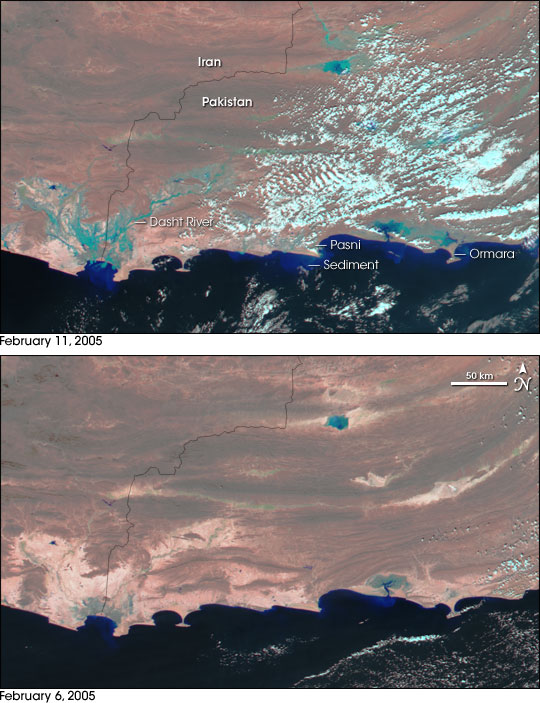 Heavy rain and snow hammered Pakistan in the first two weeks of February 2005, leaving over 300 dead as a result of floods and avalanches throughout the country. Over 200 of the deaths occurred in southwestern Pakistan, where a week of rain taxed river and irrigation systems. This image, acquired by the Moderate Resolution Imaging Spectroradiometer (MODIS) on NASA’s Aqua satellite on February 11, 2005, shows streaks of blue-green floodwater all along the coast.

The most deadly floods swept through the region around the coastal city of Pasni when an irrigation dam burst on February 10, washing away several villages and flooding the city with water. Pale blue lines trace out the contours of the flood water on the following day. The city itself is covered with a small cloud, but further evidence of flooding can be seen in the Arabian Sea to the south. Bright blue clouds of sediment fill the waters where floods washed dirt and debris into the sea. To the west, the Dasht River is dramatically flooded, having expanded from a thin green line that was barely visible on February 6, to a sprawling blue wetland. On the right side of the image, the entire coastline around Ormara has been inundated with water.

If this scene were depicted in true color, as a human eye would see it, the mud-laden flood water would blend with the tan desert landscape. To make the water visible, the image is in false color, with flood water represented in blue, while deeper ocean water is black. The bare land takes a pink tint, and the clouds are light blue. An alternate version of the image is available from the MODIS Rapid Response Team.

Heavy rains continue to flood parts of coastal Pakistan through the first week of March 2005. The Dasht and Koja Rivers along the Iran-Pakistan border continue to run high in this MODIS image.