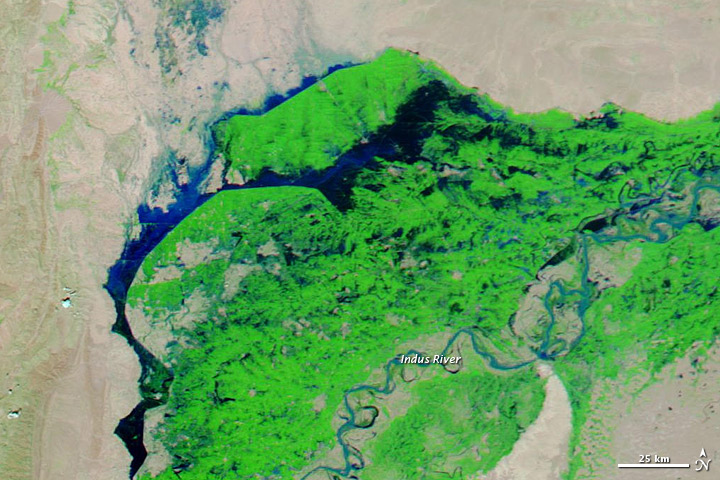 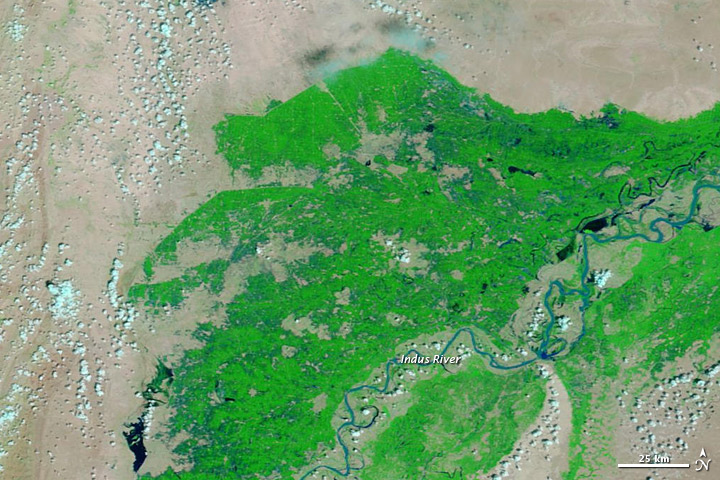 In southern Pakistan, where the borders of Punjab, Balochistan, and Sindh Provinces meet, a network of levees and canals diverts water from the Indus River to thirsty agricultural fields. Water is usually scarce in Pakistan, but heavy monsoon rains can overwhelm the country’s irrigation infrastructure, as they did in the summer of 2010.

Flood conditions returned in the summer of 2012. These images show part of the irrigation infrastructure west of the Indus River. The Moderate Resolution Imaging Spectroradiometer (MODIS) on NASA’s Aqua satellite captured the top image on September 21, 2012. The MODIS instrument on the Terra satellite captured the bottom image on September 1, 2012. Both images use a combination of visible and infrared light to increase contrast between water and land. Water varies in color from electric blue to navy. Vegetation is bright green, and bare ground is pink-beige. Clouds are pale blue-green and cast shadows.

The relatively pale blue of the water in the Indus River suggests that it is carrying heavy loads of sediment, a common occurrence during floods. In the northwest (image upper left), the pale blue suggests shallow water on a floodplain. Darker shades of blue indicate greater water depths. Deep water appears to cover large stretches of land, much of it along the edges of irrigation infrastructure, which has unnaturally straight and even contours.