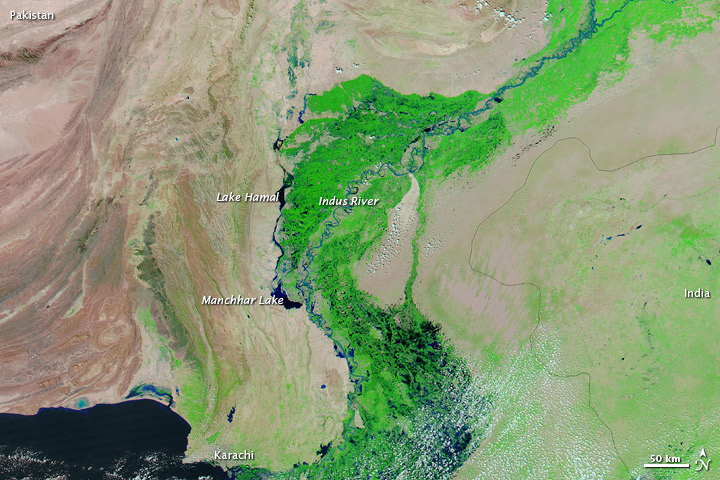 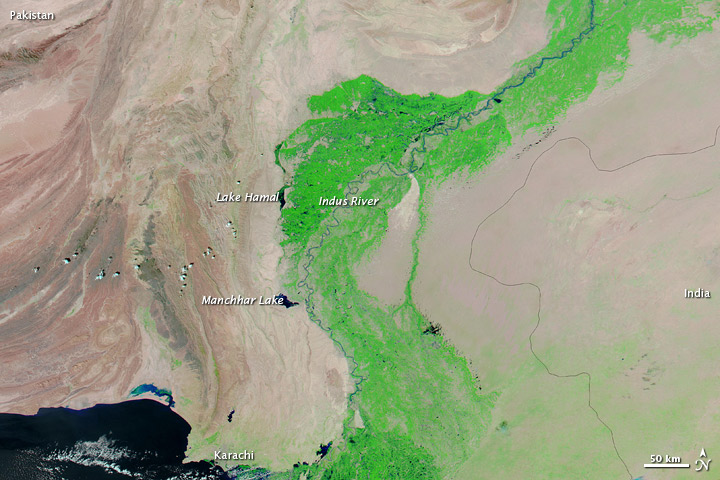 These images show a portion of the Indus River Valley where it nears the coast. Both images use a combination of infrared and visible light to increase contrast between water and land. Water varies in color from electric blue to navy. Vegetation is green and bare ground is pinkish brown. Clouds are pale blue-green and cast shadows.

In 2010, floods devastated much of the country. The floods that struck in 2011 were concentrated in the south—an unusual location for heavy monsoon rains.

Northwest of the Indus River, water lingers on normally arid land in Balochistan Province in late September 2011, although the flooding here appears slightly less severe than earlier in the month. Pools of water also occur along the coast west of Karachi.

An extensive irrigation network surrounds to the Indus River, designed to make use of water that is normally scarce. Canals link Lake Hamal and Manchhar (or Manchar) Lake. Compared to 2009, water is higher in these lakes in 2011, although this may be partly due to lingering effects of the 2010 floods. Water is also higher in the Indus River.

The highest water is apparent in Sindh Province east of the Indus. Large pools of flood water rest on what was dry land two years earlier. According to The International News, the Humanitarian Coordinator for the United Nations stated that 1.8 million people had been displaced in Pakistan, 64 percent of the Pakistanis in the flood-affected areas lacked clean drinking water, and 67 percent of the region’s food stock had been lost.