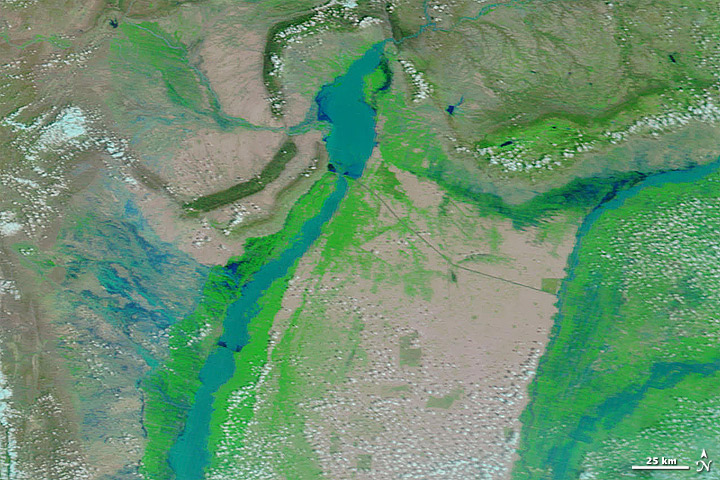 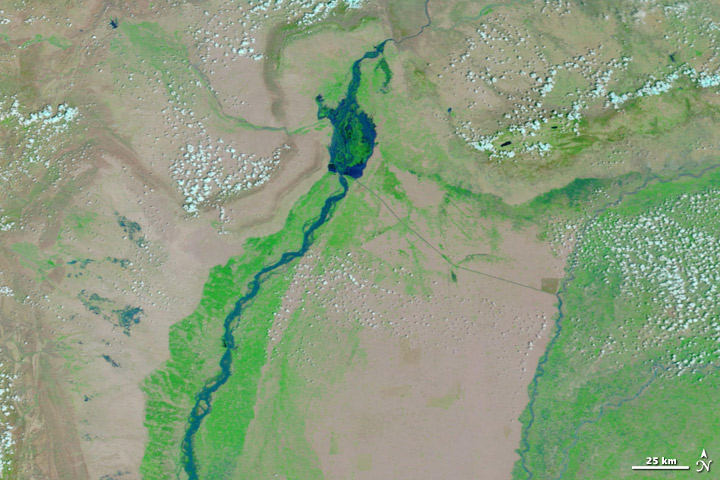 Monsoon rains fall in Pakistan every summer, but the rains beginning in late July 2010 were unusually heavy. By August 1, 2010, entire villages had washed away, more than 1,100 people had died, and an estimated 2.5 million people were affected, according to news reports. A shortage of safe drinking water and a possible outbreak of cholera were among the most pressing dangers.

The Moderate Resolution Imaging Spectroradiometer (MODIS) on NASA’s Terra satellite captured these images on July 31, 2010 (top), and August 1, 2009 (bottom). These images show the Indus River in northwestern Pakistan. Both images use a combination of infrared and visible light to increase the contrast between water and land. Water varies in color from electric blue to navy. Vegetation is green and bare ground is pinkish brown. Clouds range in color from nearly white to pale blue-green.

Acquired at the same time of year, the images show the dramatic difference caused by torrential monsoon rains. Flowing roughly north-south the Indus River appears as a braided stream in 2009, with patches of dry or nearly dry ground in the river valley. In 2010, the water level is high enough to cover areas that were dry the previous year. West of the river, long tendrils of standing water extend toward the northwest. Water levels are also significantly higher in tributaries east of the Indus River.

Officials described the flooding in northwestern Pakistan as the worst since 1929. News reports documented some 30,000 residents stranded on rooftops, and some 65 bridges completely washed away. As governments and international aid organizations struggled to assist the flood victims, weather officials forecast more monsoon rains starting August 2, 2010.