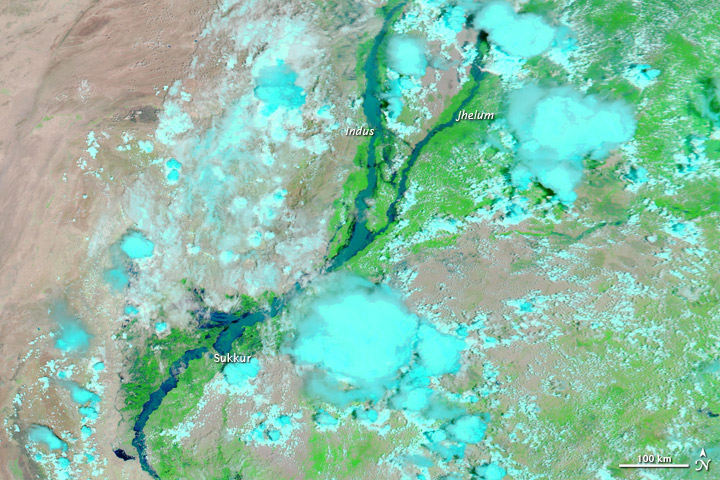 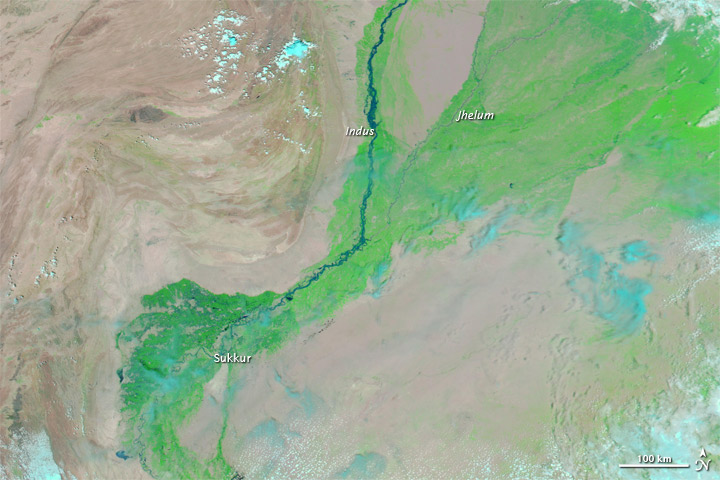 Pakistan’s major rivers remained flooded on August 15, 2010, and the flooding extended from northwestern Pakistan to the coast. The damage caused by torrential monsoon rains is apparent in these false-color images acquired by the Moderate Resolution Imaging Spectroradiometer (MODIS) on NASA’s Aqua satellite. The top image is from August 15, 2010, and the bottom image is from August 14, 2009.

Both images use a combination of infrared and visible light to increase the contrast between water and land. Water appears in varying shades of blue, and clouds appear in varying shades of blue-green. Vegetation is green, and bare ground is pinkish brown. Although clouds hide part of the Indus River in the 2010 image, enough of the land surface peeks through to document the ongoing devastation. The Indus and Jhelum Rivers are visibly swollen, the Indus River spanning tens of kilometers in places.

Although the water level had begun to fall slowly at Sukkur, it remained well above the danger level as of August 15, reported David Petley of Durham University. The same day, CBS news and the Associated Press reported that United Nations Secretary-General Ban Ki-moon described the flooding as the worst disaster he had seen. On August 14, a case of cholera was confirmed in northwestern Pakistan, heightening fears of waterborne disease.