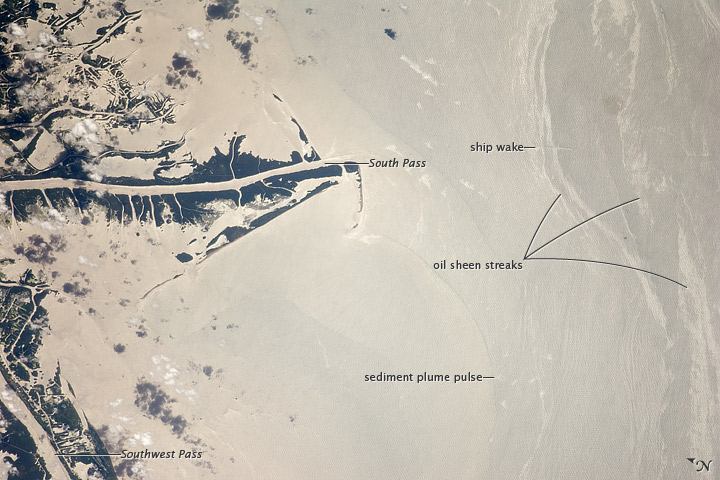 The International Space Station (ISS) observed the Gulf of Mexico oil spill in late July 2010, as part of ongoing observations of the region. When this image was taken, three months after the explosion on the Deepwater Horizon oil rig, the leak had been plugged for eight days. Water surfaces appear bright and land surfaces appear dark in the image. The stark contrast is due to sunglint, in which the Sun is reflected off water surfaces back towards the astronaut observer on board the ISS. The sunglint reveals various features in the Gulf of Mexico, especially sheens of oil that appear as packets of long bright streaks (image right). Sediments carried by the Mississippi River have a pale beige coloration in this image, with distinct margins between plumes that likely mark tidal pulses of river water into the Gulf of Mexico. A boat wake cuts across one of the oil packets at image top right.

The bright waterways known as the South and Southwest Passes of the tip of the Mississippi River Delta (image center left and lower left) provide passage for ships into the Gulf of Mexico. The section of South Pass shown in the image is 8 miles (13 km) long. This gives a sense of the proximity of the ruined Deepwater Horizon oil rig, which is located only 50 miles (80 km) to the southeast of the imaged area (not shown.) Daily maps of oil distribution produced by NOAA show predicted heavier and lighter oil movement near the Gulf coastline. The map from July 22, 2010, (PDF file) shows that on the day this image was taken from the ISS (July 23, 2010), the north edge of the “oiled” zone was expected to bank up against the Delta. The observed spread of the surface oil in the approximately 100 days since the explosion highlights the connectivity between the deep-water areas and coastlines of the Gulf of Mexico.

Astronaut photograph ISS024-E-9404 July 23, 2010, with a Nikon D2Xs digital camera using a 400 mm lens, and is provided by the ISS Crew Earth Observations experiment and Image Science & Analysis Laboratory, Johnson Space Center. The image was taken by the Expedition 24 crew. The image in this article has been cropped and enhanced to improve contrast. Lens artifacts have been removed. The International Space Station Program supports the laboratory as part of the ISS National Lab to help astronauts take pictures of Earth that will be of the greatest value to scientists and the public, and to make those images freely available on the Internet. Additional images taken by astronauts and cosmonauts can be viewed at the NASA/JSC Gateway to Astronaut Photography of Earth. Caption by M. Justin Wilkinson, NASA-JSC.

Photograph of a portion the oil slick in the Gulf of Mexico taken by an astronaut aboard the International Space Station on July 23, 2010.

Between scattered clouds, a streak of oil was visible in the Gulf of Mexico on July 20, 2010.