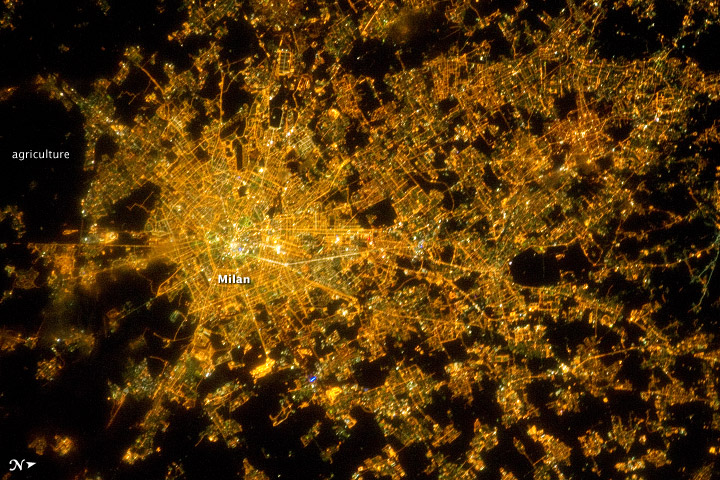 The metropolitan area of Milan (or Milano) illuminates the Italian region of Lombardy in a pattern evocative of a patchwork quilt. The city of Milan forms a dense cluster of lights in this astronaut photograph, with brilliant white lights indicating the historic center of the city where the Duomo di Milano (Milan Cathedral) is located.

Large dark regions to the south (image left) contain mostly agricultural fields. To the north, numerous smaller cities are interspersed with agricultural fields, giving way to forested areas as one approaches the Italian Alps (not shown). Low, patchy clouds diffuse the city lights, producing isolated regions that appear blurred. The Milan urban area is located within the Po Valley, a large plain bordered by the Adriatic Sea to the east-southeast, the Italian Alps to the north, and the Ligurian Sea and Appenines Mountains to the south.

Milan has the largest metropolitan area in Italy, and the fifth largest in the European Union. It is one of Europe’s major transportation, industrial, and commercial hubs, and is also a global center of fashion and culture. It is considered an “alpha” world city by the Globalization and World Cities Research Network.

Astronaut photograph ISS026-E-28829 was acquired on February 22, 2011, with a Nikon D3S digital camera using an effective 200 mm lens, and is provided by the ISS Crew Earth Observations experiment and Image Science & Analysis Laboratory, Johnson Space Center. The image was taken by the Expedition 26 crew. The image has been cropped and enhanced to improve contrast. Lens artifacts have been removed. The International Space Station Program supports the laboratory as part of the ISS National Lab to help astronauts take pictures of Earth that will be of the greatest value to scientists and the public, and to make those images freely available on the Internet. Additional images taken by astronauts and cosmonauts can be viewed at the NASA/JSC Gateway to Astronaut Photography of Earth. Caption by William L. Stefanov, NASA-JSC.

Milan, the largest city in Italy, is one of Europe’s major transportation, industrial, and commercial hubs, and a global center of fashion and culture.