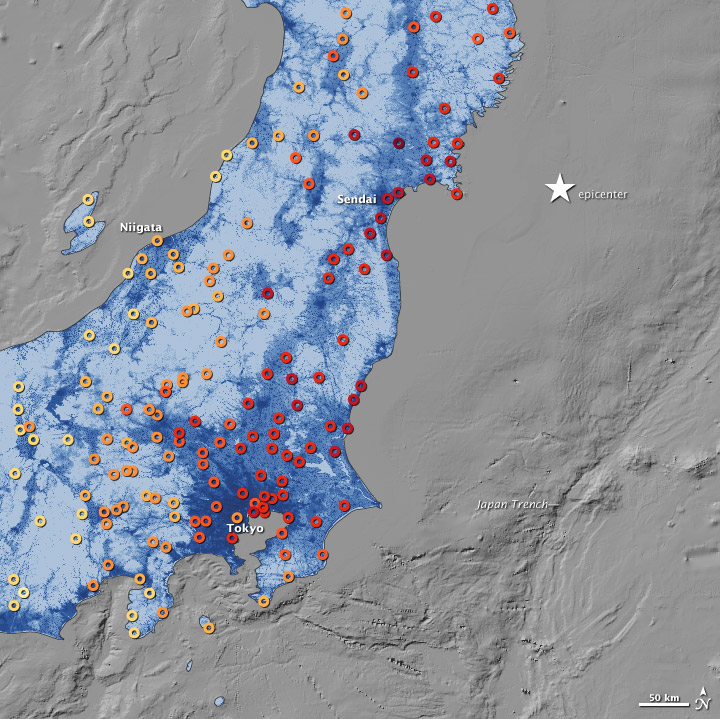 On March 11, 2011, the largest earthquake in Japan’s modern history struck off the northeast coast, about 130 kilometers (81 miles) east of the mainland region of Tohoku. Initially categorized as magnitude 8.9, the quake was later revised upward to magnitude 9.0 by the Japanese Meteorological Agency (JMA) and the U.S. Geological Survey (USGS). The event shook buildings and damaged infrastructure hundreds of kilometers away. Closer to the main shock, coastal regions were devastated both by the quake and the resulting tsunami.

This map shows the ground motion and shaking intensity from the earthquake at dozens of locations across Japan. Each circle represents an estimate of shaking as recorded by the USGS, in conjunction with regional seismic networks. Shades of pale yellow represent the lowest intensity and deep red represents high intensity. The ground shaking data is overlaid on a map of population density provided by Oak Ridge National Laboratory.

The pattern of shaking appears to run parallel to the offshore subduction trench, with the intensity decreasing more from east to west, as opposed to north and south. Ground motion also seems to be more intense in coastal and riverine areas, where settlements are built on softer sediments and less bedrock.

Note the intensity of shaking even near Tokyo, well away from the epicenter; the lack of a severe human toll in that metropolitan area is surely a testament to the nation’searthquake preparedness.

In the week after the main quake, Japan endured 262 aftershocks of at least magnitude 5, according to JMA. Forty-nine were magnitude 6 or greater, and three were magnitude 7 or higher. The aftershocks were almost entirely offshore, in a zone stretching about 500 kilometers (300 miles) from Iwate to Ibaraki prefectures.