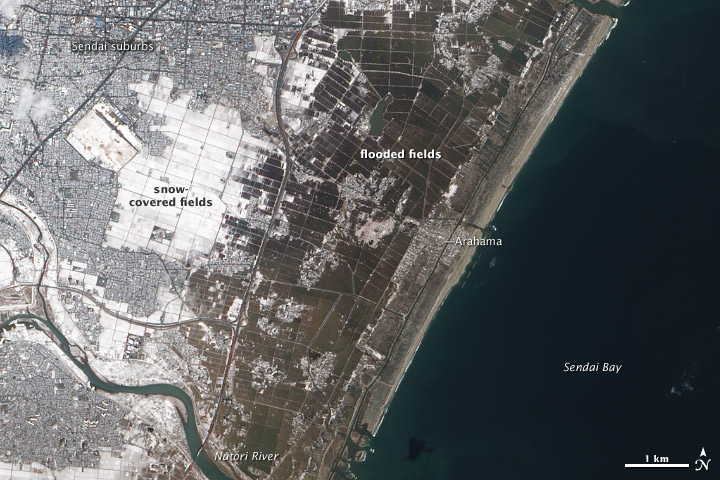 A swath of agricultural fields lies between the Japanese city of Sendai and Sendai Bay, and the area was one of the hardest hit by the tsunami on March 11, 2011. The Advanced Land Imager (ALI) on NASA’s Earth Observing-1 (EO-1) satellite captured this natural-color image of the area on March 18, 2011.

One week after the magnitude-9.0 earthquake and resulting tsunami, the fields nearest the ocean were still covered with standing water. It is possible that some areas could remain that way, as the ground level sank along the east coast of Japan during the earthquake. The same tectonic forces that lifted up the seafloor to create the tsunami also caused land to subside on the mainland. Liquefaction of soil and sediments may also have caused settling.

The Japan Meteorological Agency warned that the risk of the submergence and flood in these regions has become larger and that coastal residents should "pay special attention to the tide level...especially during the spring tide."

On the outskirts of the Sendai suburbs, fields that had escaped inundation or had already drained were later covered with snow, as was much of the Sendai metropolitan area when a cold front brought winds and snow to northeastern Japan. The iced highways hampered search-and-rescue efforts and added to the misery of 500,000 evacuees, reported Agence France-Presse. In some places, the snow was heavy enough to add dangerous weight to already damaged buildings. According to aid groups, however, most of the quake and tsunami survivors had access to adequate shelter, water, food, and medical attention.

Unfortunately for the displaced, harsh weather was expected to continue. As of March 19, 2011 (Japanese time zone), forecasts from Japan’s Meteorological Agency called for continuing cold temperatures along with rain or snow for much of the country over the next week. The forecast for Sendai included low temperatures and high probabilities of rain.