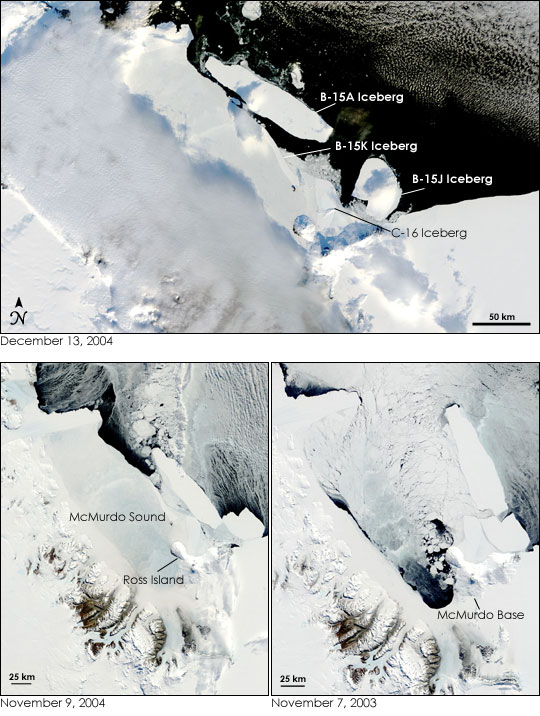 Summer’s thaw normally releases Antarctica’s Ross Sea and McMurdo Sound from the thick sea ice that accumulates over the winter, but this year the process is being blocked. As the Southern Hemisphere enters summer, the 3,000-square-kilometer (1,200-square-mile) B-15A iceberg is disrupting the normal wind and current patterns that break up the ice, leaving McMurdo Sound frozen. An official from Antarctica New Zealand—the government organization that oversees New Zealand’s research on Antarctica—told the Associated Press that more ice has accumulated in the sound this year than any other year on record, thanks to the giant berg.

The effect of the B-15A iceberg on McMurdo Sound is apparent in these true-color images, acquired by the Moderate Resolution Imaging Spectroradiometer (MODIS) on NASA’s Terra satellite on December 13, 2004, top, November 9, 2004, bottom left, and November 7, 2003, bottom right. By November 7, 2003, sea ice had begun to clear from McMurdo Sound. In 2004, the ice remained solid through December 13. Though the B-15A iceberg was present both years, its position has shifted just enough to block the flow of ice into the Ross Sea.

In the month that has passed between November 9 and December 13, the long B-15A iceberg has drifted away from Ross Island on the open waters of the Ross Sea. The B-15J iceberg, which broke from B-15A in October 2003, has rotated and may be following its parent. The frozen McMurdo Sound is a bluish white to the left of the two large icebergs. To their right is the smooth white Ross Ice Shelf, the large sheet of floating ice from which the B-15 iceberg calved in 2000. The rugged fjords of Scott Coast are partially free of snow in the bottom center of the image.

The build-up of ice presents significant problems for the inhabitants of Antarctica. Penguins must now swim great distances to reach open waters and food. Adult penguins may not be able to make the trip and return with food for their young. As a result, many chicks could starve, says Antarctica New Zealand in the Associated Press. It could also be difficult for supply ships to reach the United States’ McMurdo Base and New Zealand’s Scott Base in December and January.