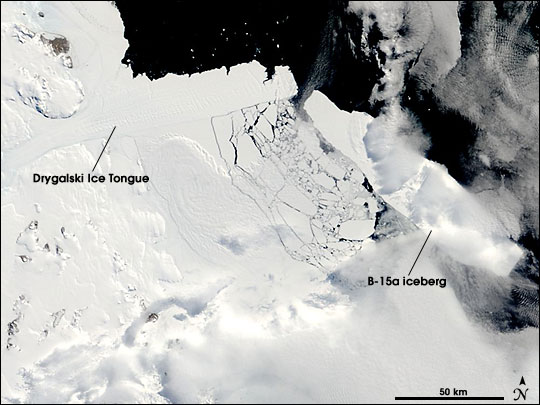 After remaining a solid mass throughout Southern Hemisphere spring and the first part of summer, sea ice in McMurdo Sound finally began to break into pieces in January 2005. McMurdo Sound passes through an annual cycle in which thick ice freezes on the water during Antarctica's frigid winter, then breaks and drifts into the Ross Sea during the summer. By late spring in early November, a channel of ice has typically been swept from the Sound. This year, the process was disrupted by the giant B-15A iceberg. Topping 129 kilometers (80 miles) in length, the Long Island-sized iceberg blocked the currents that usually clear out the Sound. As late as the first week of January, the ice in the Sound remained intact.

In early January, temperatures rose and a powerful storm moved over Antarctica. Flights scheduled to carry supplies to the McMurdo Station (United States) and Scott Base (New Zealand) research stations near McMurdo Sound were delayed due to the fierce weather. Strong winds churned the ocean and, along with warmer temperatures, may have contributed to the break-up of the ice. When the clouds cleared on January 13, the Moderate Resolution Imaging Spectroradiometer (MODIS) flying onboard NASA's Terra satellite revealed that the formerly solid ice had been broken into chunks.

The frozen expanse of water between the shore (left) and the open sea (right) had been a serious problem for penguins, which had to travel a greater distance to reach open waters and food. Though adults were probably able to make the trip to feed themselves, scientists feared the adults would have to consume most of the food they were bringing to their chicks because of the increased length of the return journey. (See "Iceberg Blocks Penguin Chicks.") While the breaking ice may shorten the trip and bring relief to the penguins, it is not clear if the changing conditions will save penguin chicks from starvation. The ice was also a potential problem for supply ships trying to reach McMurdo Station and Scott Base. Instead of cutting through the usual 64 kilometers (40 miles) that separate the pier from open waters, icebreakers had to chart a course through 129 kilometers (80 miles) of ice. The icebreaker succeeded in reaching McMurdo in early January.

The image also reveals that the B-15A iceberg has drifted away from the Drygalski Ice Tongue. The massive iceberg had been on course to strike the ice tongue in what could have been a collision of giants. The Drygalski Ice Tongue is a floating extension of a land-based glacier. Such ice tongues have been known to break under smaller strains, and according to NASA scientist Robert Bindschadler, the Drygalski Ice Tongue has never experienced a blow of the magnitude that B-15A could deliver. The iceberg had been moving steadily towards the ice tongue, but its movement slowed in late December. Just as the gap between the two narrowed to less than 4 kilometers, the iceberg rotated slightly and may have become grounded. By January 13, the gap widened as the iceberg appeared to reverse its course, perhaps in response to being grounded, says Bindschadler. To see an animation of the iceberg's movement, please visit www.nasa.gov. Daily images of the iceberg are available from the MODIS Rapid Response Team.