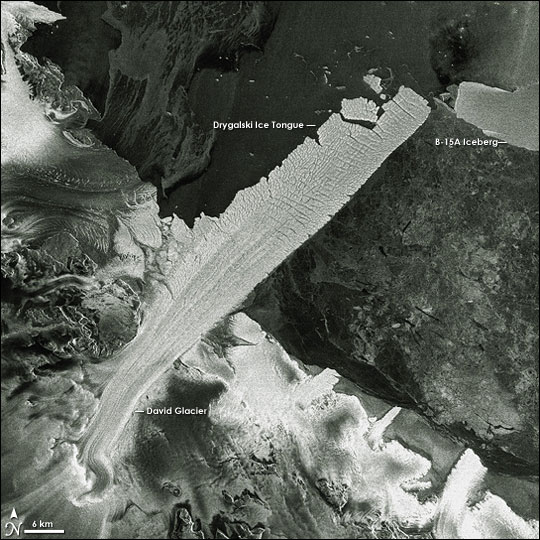 The Prince Albert Mountains rise up from Antarctica’s Scott Coast on the western shores of the Ross Sea. Like the Rocky Mountains, the Andes, the Himalayas, or the Alps, the Prince Albert Mountains are being shaped by mountain glaciers. This image, collected by the Advanced Synthetic Aperture Radar on the European Space Agency’s ENVISAT satellite, shows the David Glacier on the 1,831-meter-high Mt. Joyce. As ice piles on the glacier, it slides under its own weight to the ocean. The ice doesn't break up when it reaches the ocean; rather, it floats, forming a long tongue of ice. The floating end of the David Glacier is the Drygalski Ice Tongue.

This floating spit of ice was recently menaced by the B-15A iceberg, a 120-kilometer-long giant that had been drifting on a collision course with the ice tongue before becoming grounded. The tip of the iceberg is visible in the upper right corner of the image, mere kilometers away from the Drygalski Ice Tongue. NASA scientists speculated that if a collision were to occur, the force could break off a section of the ice tongue. No collision was necessary, however; on February 21, 2005, Drygalski calved an iceberg on its own. The five-by-ten-kilometer iceberg was floating off the left side of the ice tongue on February 22, when this image was acquired. The event is a normal part of the evolution of the ice tongue—pieces regularly break from the tongue as the glacier pushes more ice out over the sea. This image shows cracks, formed by time and ocean currents, which become more numerous towards the end of the tongue.