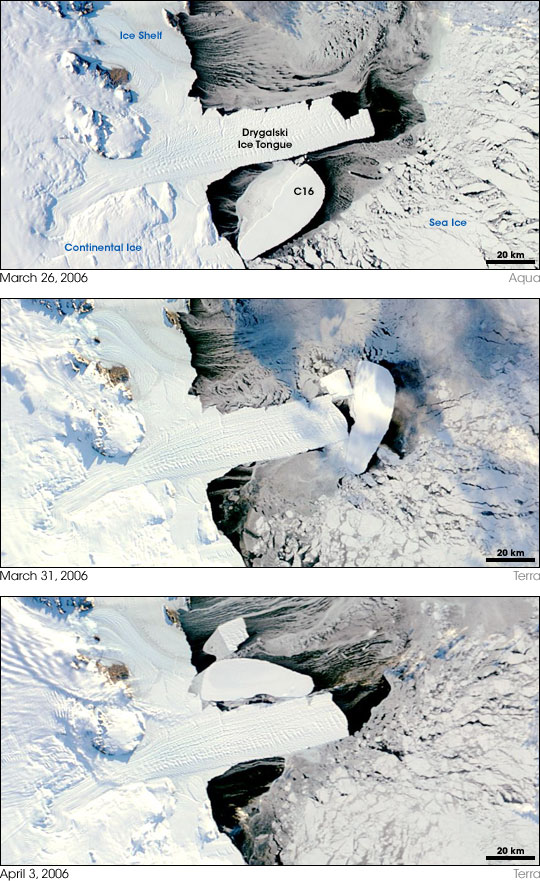 Large ice shelves such as the Ross Ice Shelf on the western Antarctica coastline undergo periodic episodes of large-scale iceberg calving. In 2000, several large pieces of the shelf broke off and wandered around in the Ross Sea, breaking into several smaller bergs over the next few years. Among the survivors of the initial calving event is piece C-16. In late March 2006, C-16 worked its way northward along the coastline and plowed into the tip of the Drygalski Ice Tongue. The collision knocked loose a chunk from the tip of the ice tongue.

These images show iceberg C-16 and the Drygalski Ice Tongue before and after the collision. On March 26, the table-like C-16 was poised at the southern edge of the ice tongue, but buffered from direct contact by a small wedge of sea ice. According to scientists at the Space Science and Engineering Center at University of Wisconsin, Madison, who monitor the activity, C-16 had to overcome strong winds, known as katabatic winds, that blow down the topographic incline from the top of David Glacier (the source of the ice tongue) toward the sea. The katabatic winds would have been driving the berg toward the east, but not strongly enough to completely clear the ice tongue. The image from March 31 shows that C-16 had clipped the tip of the ice tongue, breaking off a piece. By April 3, both pieces of ice had swung around to the other side of the ice tongue.

Scientists monitor ice conditions such as calving and sea ice formation in the Ross Sea for both scientific and practical reasons. Ice processes in polar regions are important indicators of climate change, and the movements of sea ice and icebergs affect shipping lanes to the research bases in Anartica’s McMurdo Sound. Satellite observations are critical for this monitoring task because of the remoteness and extreme harshness of the climate.

The edge of this Antarctic glacier protrudes from the coast of Ross Island with a long, narrow, jagged sheet of ice.