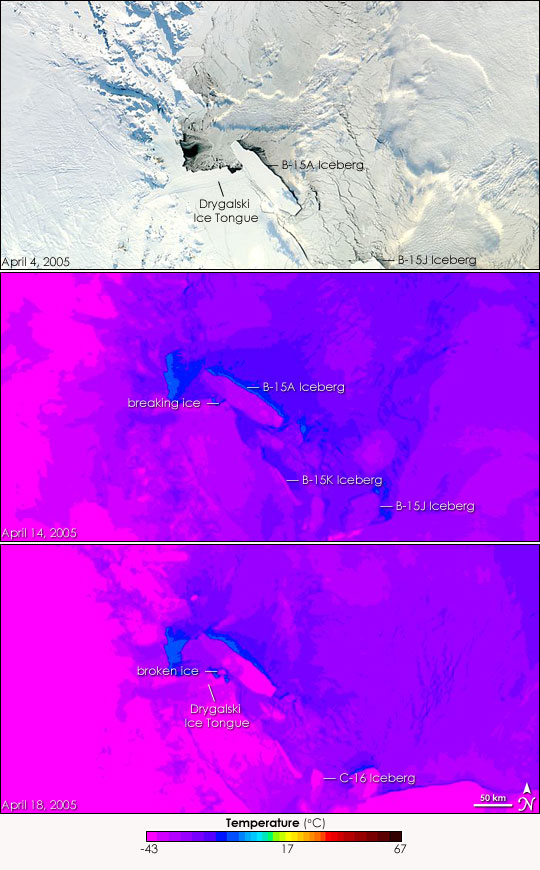 The giant B-15A iceberg has menaced the Drygalski Ice Tongue since December 2004. At 122 kilometers (76 miles) in length by 28 kilometers (17 miles) in width, the bullying iceberg charged with great momentum towards the ice tongue, threatening to shatter the floating extension of the Davis Glacier. A scant five kilometers from Drygalski, B-15A ground to a stop, most likely grounded in the shallower waters near the shore. In the weeks that followed, the iceberg rotated free, until finally it began to drift past the ice tongue into the Ross Sea. Just when it looked as if Drygalski might escape a collision, B-15A delivered a glancing blow, knocking the end of the ice tongue loose.

This series of images, collected by the Moderate Resolution Imaging Spectroradiometer (MODIS) on NASA’s Aqua and Terra satellites captures the collision and its aftermath. The top image shows the region on April 4, 2005, as B-15A started to move out of the region. By April 14, the dark night of winter had begun to descend over Antarctica and MODIS could no longer capture the photo-like images it had ten days before. MODIS’ thermal bands, however, can “see” in the dark, revealing the outlines of the iceberg and the ice tongue. Designed to measure the temperature of land, the algorithm used to create these images may not reflect the exact temperature of the Antarctic ice and water, but it does show the difference in temperature between liquid water, sea ice, icebergs, land ice, and clouds. These temperature differences make it possible to see the collision between B-15A and Drygalski even though the light was too dim to observe in the visual bands.

Freshwater ice (the icebergs, the ice tongue, and land ice) is bright purple in this temperature scale, while the thin sea ice that has just started to form is darker purple. Liquid water outlines the iceberg in a warm blue, and clouds veil the scenes, particularly the center scene, with dull purple and blue.

The collision probably occurred a few days before the center image was acquired on April 14. Here, the massive iceberg has recently scraped along the tip of the ice tongue, breaking a large chunk of ice away. A faint dark purple line reveals where the break has occurred. Four days later, the ice that had formed the tip of the Drygalski Ice Tongue drifted along side B-15A. While the broken ice is dwarfed by the massive iceberg, it measures roughly 12 kilometers (7.5 miles) across on April 18.

B-15A was not the only iceberg on the move in this series of images. B-15J, which broke from B-15A in late 2003, and B-15K, which broke away a short time later, have also drifted away from the shore. The C-16 iceberg wasn’t in the scene on April 4, but by April 18, it was fully visible. This migration will soon stop as the freezing sea traps the bergs in place.