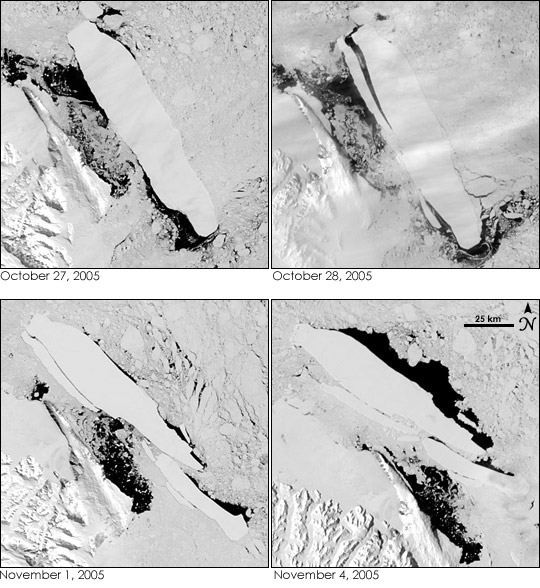 The largest remaining piece of one of the largest icebergs ever observed began to crumble on October 28, 2005, after running aground off Antarctica’s Cape Adare. The B-15A iceberg is the main body of the B-15 iceberg, which broke from the Ross Ice Shelf in March 2000. When it first formed, the massive berg measured 270 kilometers long by 40 kilometers wide (170 by 25 miles), making it about the size of the state of Connecticut. By November 5, 2005, the berg had dwindled to a still respectable 110 by 20 kilometers (70 by 13 miles).

This is not the first time that B-15A has shed pieces. Several pieces broke off between 2000 and 2005; but unlike previous events, the iceberg broke in several locations in October 2005. The Moderate Resolution Imaging Spectroradiometer (MODIS) sensors on NASA’s Aqua and Terra satellites captured the iceberg’s break-up in the above series of images. On October 27, there was no sign, no faint cracks or lines, that indicated that the iceberg was under stress. But a few hours later, MODIS captured the upper-right image, showing that two slivers (the largest of which merited its own name, B-15M) had broken from the berg. By November 1, the lower-left half of B-15A had broken away to form B-15N, and several smaller pieces had been chiseled off both sides of B-15A.

The currents that pulled the iceberg apart tugged B-15A around Cape Adare, leaving its daughter bergs behind. On November 4, the shrinking berg was moving out of the Ross Sea on the East Wind Drift, an ocean surface current that circles Antarctica counterclockwise. The iceberg’s departure was, no doubt, a relief to denizens of the Ross Sea region. From 2000 to 2003, the iceberg lurked off Ross Island, the location of the U.S. Antarctic Program’s McMurdo Research Station. In 2004, the berg began to drift north, trapping sea ice in McMurdo Sound. The excess sea ice stranded penguins, who could not reach open water and return with food for their young. The shifting berg also made planning a shipping route through the ice to McMurdo Station difficult. To read more, see Operation Antarctica on the Earth Observatory.