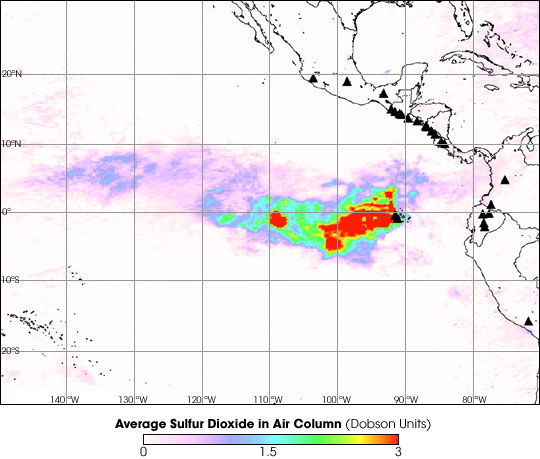 On October 22, 2005, one of the six volcanic summits on Isla Isabela in the Galapagos Islands archipelago began erupting. The Sierra Negra Volcano continued to emit ash clouds and lava through the end of the month, before apparently quieting down around October 31. The volcanic emissions contain sulfur dioxide gas, which mixes with water vapor in the air and turns into very reflective sulfate aerosol particles. During large eruptions, volcanoes emit enough sulfur dioxide that the resulting haze of sulfate aerosols can cool the climate by reflecting incoming solar radiation back into space. The Sierra Negra eruption spread a volcanic haze across the Pacific Ocean for several hundred kilometers.

This image shows the average concentration of sulfur dioxide over the Sierra Negra Volcano from October 23-November 1 measured by the Ozone Monitoring Instrument (OMI) on NASA’s Aura satellite. In agreement with reports from on-the-ground monitors that the eruption subsided around October 30 or 31, OMI stopped seeing sulfur dioxide coming from the volcano on October 31. In this image, red pixels cover the areas of highest concentration, while the lowest concentrations are represented by pink pixels. The plume of emissions is concentrated to the west of the Galapagos Islands. The sulfur dioxide is measured in Dobson Units (DU), the number of molecules in a square centimeter of the atmosphere. If you were to compress all of the sulfur dioxide a column of the atmosphere into a flat layer at standard temperature and pressure (0 degrees Celsius and 1 atmosphere), one Dobson Unit would be 0.01 millimeters thick and would contain 0.0285 grams of sulfur dioxide per square meter.

The Earth Observatory has additional images of the Sierra Negra eruption in the Natural Hazards: Volcanoes section of the Website.