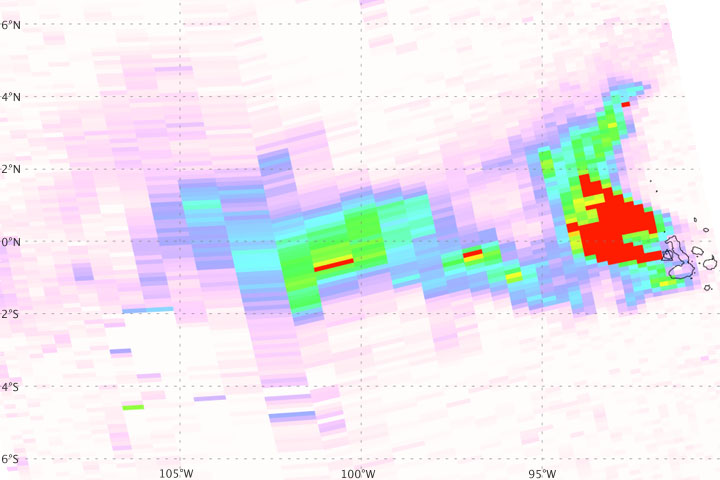 In early April 2009, La Cumbre Volcano on Isla Fernandina in the Galapagos Islands erupted, producing an ash plume and lava flows. The eruption also produced a substantial cloud of sulfur dioxide that extended far west of the islands, over the Pacific Ocean.

As the sulfur dioxide cloud moved away from the volcano, its intensity dissipated, evidenced by the red hues near the summit, and blues, greens, and lavenders farther away. Near the center of the image, the plume seems to intensify, but this is actually an artifact of the data gathering process. This image is compiled from two separate overpasses of the Aura satellite, and the center of this image shows observations taken at the satellite swath edge. At its swath edge, a satellite looks through a thicker layer of atmosphere than it does when it looks straight down, and this longer line of sight exaggerates the apparent intensity of haze, aerosols, and gases such as sulfur dioxide.

At high concentrations at ground level, sulfur dioxide can cause haze, respiratory irritation and, over time, damage to buildings. At high altitudes, sulfur dioxide can affect climate. Oxidation transforms this gas into sulfate aerosol particles, which create a bright haze that reflects sunlight back into space and prevents it from reaching the Earth.