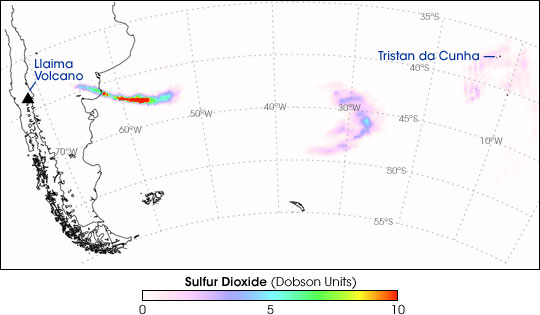 On January 1, 2008, Chile’s Llaima Volcano erupted, raining ash on the local wilderness park and sending a column of smoke skyward. Although no injuries or damage were reported, the eruption forced the evacuation of dozens of tourists from the volcano’s base, according to Reuters News Service.

Sulfur dioxide can combine with water to make a highly reflective haze of sulfuric acid. As this haze reflects sunlight away from Earth, a substantial eruption, such as the 1991 eruption from Mount Pinatubo, can have a cooling effect on the planet. OMI measurements indicated that the Llaima eruption produced three orders of magnitude less sulfur dioxide than Pinatubo, and so was not expected to have a significant effect on climate.

Llaima Volcano is a stratovolcano—a steep-sloped cone composed of alternating layers of solidified ash, hardened lava, and rocks ejected by previous eruptions. It is one of Chile’s largest and most active volcanoes.