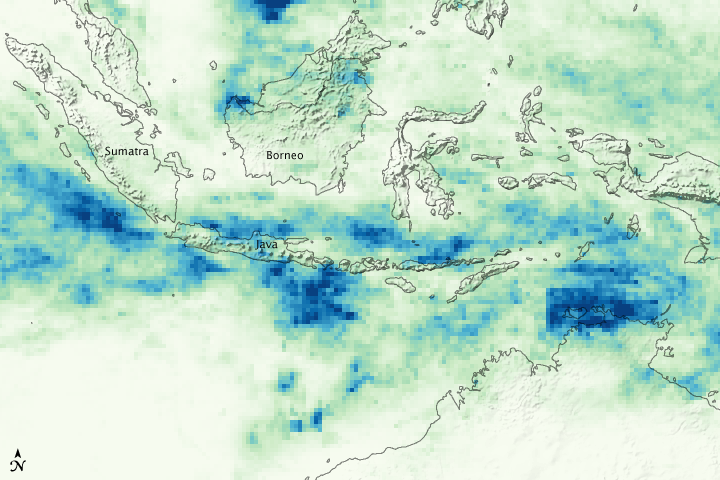 Persistent heavy rains led to flooding and landslides throughout Indonesia in late December 2007 and early January 2008, resulting in numerous fatalities and crop losses. The most heavily populated island in the chain, Java, was the hardest hit—at least 112 people died on the island from flooding or landslides.

This image shows rainfall totals from the TRMM-based, near-real-time, multi-satellite Precipitation Analysis (MPA) produced at NASA’s Goddard Space Flight Center for December 24, 2007, to January 2, 2008. The highest rainfall totals for the period (shown in dark red) were over 250 millimeters (about 10 inches). Although the highest amounts were over water, parts of Java received in excess of 6 to 8 inches (orange and red areas). Deforestation in the region may have contributed to the devastating mudslides.

The area’s normal rainy season, which lasts from December through February, appears to have been intensified by two factors. The first is an ongoing La Niña, the counterpart to El Niño. La Niña brings stronger-than-normal easterly trade winds to the eastern equatorial Pacific Ocean, and these winds cause warm, rain-enhancing waters to pile up in the western Pacific around Indonesia. The other factor that contributed to the unusually heavy rains is a weather phenomenon called the Madden-Julian Oscillation (MJO). In a segment for its nationally syndicated radio show, The Weather Notebook, the Mount Washington Observatory gave this explanation of the MJO:

Back in 1971, two scientists named Roland Madden and Paul Julian analyzed a decade’s worth of readings from the tropical Pacific and discovered that the atmosphere down there periodically coughs up a massive bubble of acute meteorological disturbance. An armada of high-topped clouds rises over the Indian Ocean and then sails east, inundating Indonesia before invading the western Pacific. Strong westerlies blow over the western Pacific, while at 50,000 feet, fitful gusts created by rapidly rising air columns circle the globe. This atmospheric kink, dubbed the Madden-Julian Oscillation or MJO, takes between 30 and 60 days to work itself out.

NASA image courtesy Jesse Allen based on data provided by the TRMM team. Caption by Steve Lang and Rebecca Lindsey.

Persistent heavy rains led to flooding and landslides throughout Indonesia in late December 2007 and early January 2008, resulting in numerous fatalities and crop losses. The most heavily populated island in the chain, Java, was the hardest hit—at least 112 people died on the island from flooding or landslides.

Flooding and Landslides in Indonesia

Flooding and Landslides in Indonesia