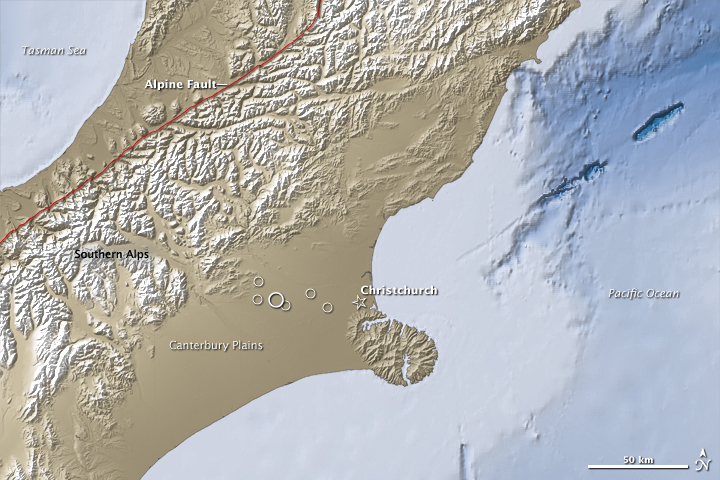 Residents of Christchurch, New Zealand, and surrounding communities were rattled awake at 4:35 a.m. on September 4, 2010, when a magnitude 7.0 earthquake shook the region. As this map shows, the quake was centered about 45 kilometers (30 miles) west of Christchurch. Made from data from the Shuttle Radar Topography Mission, the map illustrates how geologic activity shaped the region and why it makes Christchurch vulnerable to earthquake damage.

New Zealand sits on top of the boundary between the Pacific and Australian tectonic plates. The two plates slip past each other in the South Island, creating the Alpine Fault. Over time, the motion has built the Southern Alps. The uplift in the mountains makes it easy for geologists to identify the Alpine Fault.

The September 4 earthquake, however, did not occur on the Alpine Fault. It happened along an east-west fault that had not been identified before. Several faults are scattered across New Zealand’s South Island, and all are associated with the motion of the two tectonic plates. The faults are identifiable by the way they deform the ground. The fault responsible for the September 4 earthquake had not been mapped because it was buried under the Canterbury Plains.

The Canterbury Plains are flatlands between the Southern Alps and the Pacific Ocean. They were created as rivers running out of the mountains at the end of the last ice age (about 16,000 years ago) deposited gravel and sand. The deposits buried any sign of geologic activity, hiding faults on the plain.

The gravel deposits that made the plains also made the September 4 earthquake more destructive than it might otherwise have been. The gravel transmits energy, amplifying the ground shaking even at distances far from the center of the quake. It is as if the Canterbury Plains were made of gelatin.

The gravel and sand soil of the alluvial plain is also very prone to liquefaction, meaning the soil acts like a liquid during the quake. The shaking re-arranges the gravel, compressing it and causing the surface to sink. Water in the soil is pushed out by the compression, creating fountains and mud and sand volcanoes. Several such events were reported in and around Christchurch on September 4.