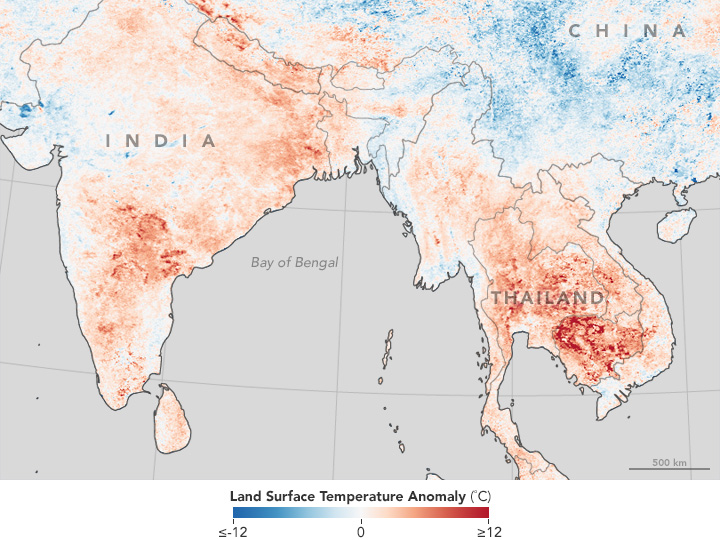 April in Southeast Asia is usually a hot month, following the cool, dry season and preceding the monsoon season. But April 2016 was not your typical April. Throughout the month, ground-based measurements of air temperatures soared above average; one location in Thailand even broke the national record.

Satellite observations show a similarly hot picture. The map above shows land surface temperatures from April 2016 compared to the 2001–2010 average for the same month. Red areas were hotter than the long-term average by as much as 12 degrees Celsius (22 degrees Fahrenheit) in some places; blue areas were below average. White pixels had normal temperatures, and gray pixels did not have enough data, most likely due to excessive cloud cover.

According to news reports, at least 50 towns and cities matched or broke their daily air temperature records. On April 28, the temperature in Mae Hong Son was the highest ever recorded in Thailand, reaching 44.6 degrees Celsius (112.4 degrees Fahrenheit).

Southeast Asia was not the only area that endured intense heat in April. In India, ground-based measurements recorded temperatures 4-5 degrees Celsius (8–10 degrees Fahrenheit) above normal. At least 300 people are reported to have died from heat-related complications during the month. A year earlier, more than 2,500 people died during India’s 2015 heat wave—one of the five deadliest on record. 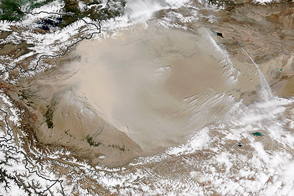