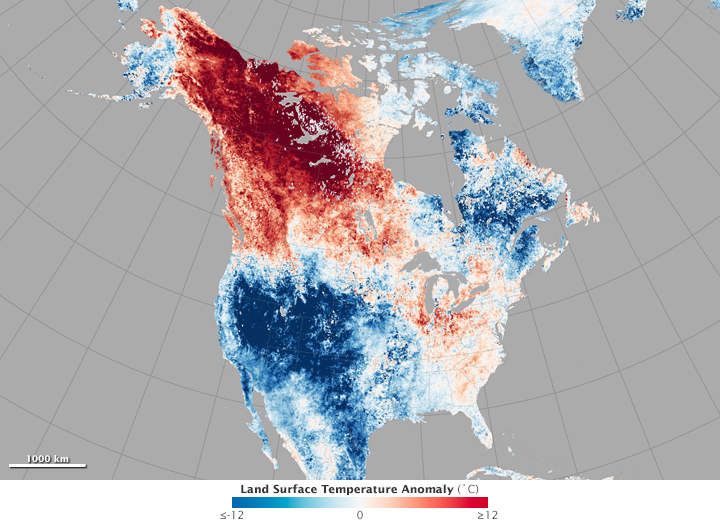 In the third week of May, it was warmer in Fairbanks, Alaska, than in Washington, D.C. The small town of Eagle, Alaska, was hotter on May 23 than it has been on any day in Houston or Dallas this year. In what has become a frequent occurrence in the past few years, temperature profiles in North America appeared to be upside down.

The map above shows North American land surface temperatures from May 17–24, 2015, compared to the 2001–2010 average for the same eight-day period. Shades of red depict areas that were hotter than the long-term average; areas in blue were below average for the week. White pixels were normal, and gray pixels did not have enough data, most likely due to excessive cloud cover.

This temperature anomaly map is based on data from the Moderate Resolution Imaging Spectroradiometer (MODIS) on NASA’s Terra satellite. Observed by satellites uniformly around the world, land surface temperatures (LSTs) are not the same as air temperatures. LSTs reflect the heating of the land surface by sunlight and they can sometimes be significantly hotter or cooler than air temperatures. (To learn more about LSTs and air temperatures, read: Where is the Hottest Place on Earth?)

On May 23, the air temperature at Fairbanks International Airport reached 86 degrees Fahrenheit (30 degrees Celsius), breaking the record of 80°F (26.7°C) from 2002. That same day, thermometers hit 91°F (32.8°C) in Eagle, marking the earliest 90-degree day in state history. The town had nine consecutive days above 80°F. In Barrow, Alaska, on the shores of the Arctic Ocean, temperatures climbed to 47°F on May 21, close to 18°F above normal. Temperatures normally do not reach that high until mid-June.

To the south and east, at least 12 temperature records were set in Canada’s Yukon and Northwest Territories. Temperatures in Faro reached 81.3°F (27.4°C), 14°F (7.5°C) above the old record. With humidity levels between 10 and 20 percent, civil agencies warned of wildfire. At least 31 fires were reported in the Yukon alone as of May 24.

According to several meteorologists, the unseasonable heat wave has been caused by a kinked jet stream that is sending air masses in a more north-south flow than the more typical east-west direction. The pattern of the jet stream may be related to atmospheric waves and circulation stirred up by the remnants of Typhoons Noul and Dolphin.

The global view of land surface temperatures for May 17–24 (below) reflects cooler temperatures in eastern Canada, where vineyards lost some of their crop due to late-season frost. In the southwestern United States, cooler temperatures and data gaps reflect the persistent cloud cover and rainfall over much of the area. 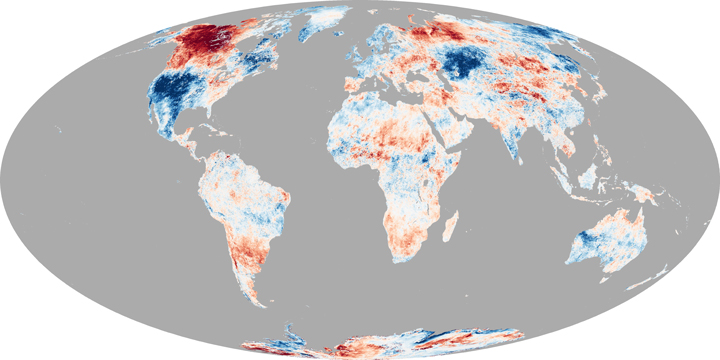 Around the world in southern Asia, however, the LST map shows its limitations. India has also been caught in a heat wave. However, the MODIS sensor did not observe a single cloud-free day across the entire country in the eight-day period. Cloudy patches on different days over different parts of the country may have caused the heat signal to be smoothed out. It is also possible that warm, humid air masses were more responsible for the heat wave than direct solar heating of the ground. Either way, daytime land surface temperatures did not register as anomalous compared to other years.