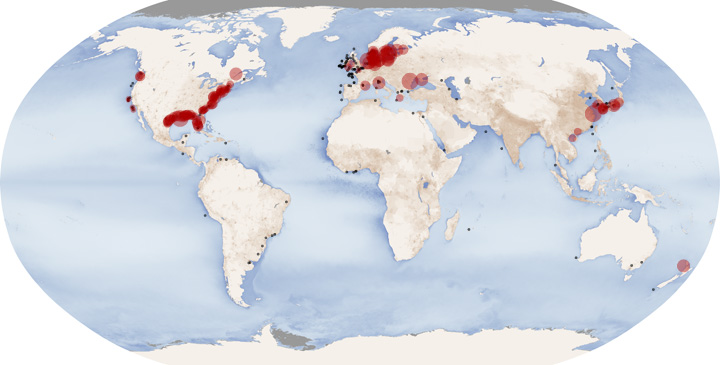 The size and number of marine dead zones—areas where the deep water is so low in dissolved oxygen that sea creatures can’t survive—have grown explosively in the past half-century. Red circles on this map show the location and size of many of our planet’s dead zones. Black dots show where dead zones have been observed, but their size is unknown.

It’s no coincidence that dead zones occur downriver of places where human population density is high (darkest brown). Some of the fertilizer we apply to crops is washed into streams and rivers. Fertilizer-laden runoff triggers explosive planktonic algae growth in coastal areas. The algae die and rain down into deep waters, where their remains are like fertilizer for microbes. The microbes decompose the organic matter, using up the oxygen. Mass killing of fish and other sea life often results.

Satellites can observe changes in the way the ocean surface reflects and absorbs sunlight when the water holds a lot of particles of organic matter. Darker blues in this image show higher concentrations of particulate organic matter, an indication of the overly fertile waters that can culminate in dead zones.

Naturally occurring low-oxygen zones are regular features in some parts of the ocean. These coastal upwelling areas, which include the Bay of Bengal and the Atlantic west of southern Africa, are not the same as dead zones because their bottom-dwelling marine life is adapted to the recurring low-oxygen conditions. However, these zones may grow larger with the additional nutrient inputs from agricultural runoff.

The number and size of ocean dead zones is closely connected to human population density.