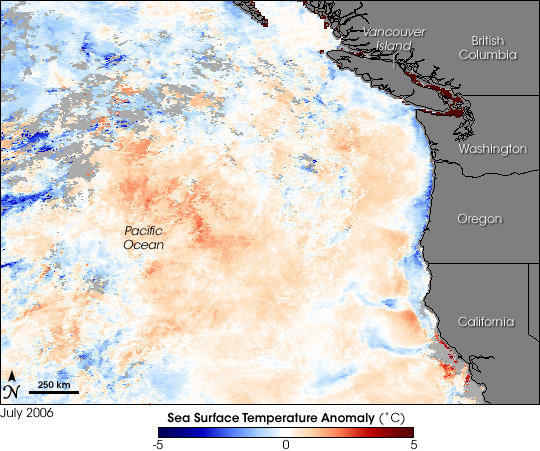 Off the coast of Oregon, a large dead zone—an area of water where the oxygen concentration is so low that little to no marine life can survive—has been appearing each summer since 2002. The dead zones appear to be linked to an unusually persistent northerly wind that pushes surface waters away from the coast. The cool waters that well up from deeper in the ocean to replace them are rich in nutrients but low in oxygen. These high-nutrient, low-oxygen waters “pack a one-two punch in creating dead zones,” says Francis Chan, an Oregon State University scientist studying the events. The excess nutrients fertilize an overgrowth of algae and other marine phytoplankton. When the plants die, bacterial decomposition sucks more oxygen out of the already oxygen-poor water.

The pockets of blue, cooler-than-average waters hugging the Washington and Oregon coastlines are consistent with unusually persistent or intense upwelling of deep, cold water. Upwelling is a fundamental part of the Oregon coastal ecosystem, but typically, northerly winds that lead to upwelling alternate throughout the summer with southerly winds. The shift in winds can suppress upwelling, mix the waters, and prevent nutrient overload.

Unlike other coastal areas where large rivers routinely carry agricultural runoff and wastewater into the ocean, large coastal dead zones are not typical for Oregon, according to Chan. “The upwelling water at the coastal shelf break—between 20 and 50 kilometers offshore at a depth of about 100 meters—is already borderline hypoxic; it has far less oxygen than we would expect even for deep water,” says Chan. So even before the deeper water has a chance to enter the overly productive surface waters, the water is low in oxygen. “Within 1 kilometer of the shore, there are places where oxygen levels are near zero. There is nothing like this in any records we have found,” said Chan.

In addition to the persistent north wind, Chan says they are also curious about large phytoplankton blooms that occurred in the late spring and early summer in the waters of Washington and Vancouver. “Our water comes from up north,” says Chan. If the large blooms in the north deprived the water there of oxygen, that could explain why the water now welling up at the coastal shelf break is unusually low in oxygen. Scientists are studying the change in wind patterns and the response of the marine ecosystem to determine whether the changes are an interlude in a natural cycle or whether they signal a more permanent shift in the regional climate and the health of the ecosystem.

Mouth of the Mississippi