Mouth of the Mississippi 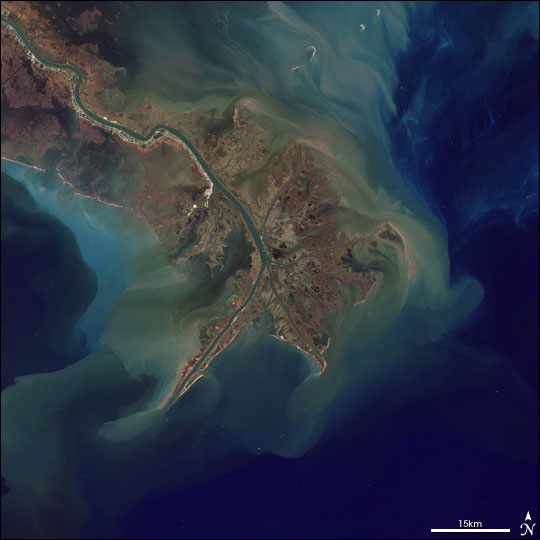 The Mississippi River drains the heart of the North American continent, carrying vast quantities of sediment and depositing it along the shore of Louisiana and into the Gulf of Mexico. The sediment is composed of topsoil, sand, dead and decaying plants, and anything else washed away by a strong rainstorm far upstream. Many of these effluents are nutrients that act as fertilizer for the microscopic plants (phytoplankton) living near the surface of the Gulf waters. Each summer the phytoplankton population explodes, fueled by the long summer days and the nutrients supplied by the Mississippi. A similar effect occurs in a stagnant pond choked with algae (a common type of phytoplankton). As the phytoplankton age, die, and decompose, bacteria absorb oxygen dissolved in the water, creating a “dead zone” along the shore at the ocean bottom. The oxygen-poor water is deadly to animals, from the microscopic zooplankton that graze on phytoplankton to crustaceans, molluscs, and fish.

Once infrequent, the Gulf of Mexico dead zone is now an annual event, triggered by phosphorus and nitrogen in fertilizers used on farms throughout the central United States and as far away as Saskatchewan, Canada. In the fall, strong winds from seasonal storms stir the water, mixing the oxygen-poor deep water with oxygen-rich surface water, bringing a reprieve until the next spring.

The true-color image above was acquired on November 27, 1999, by the Enhanced Thematic Mapper plus (ETM+) aboard NASA’s Landsat 7 satellite. For more information and images, read Mississippi Dead Zone.