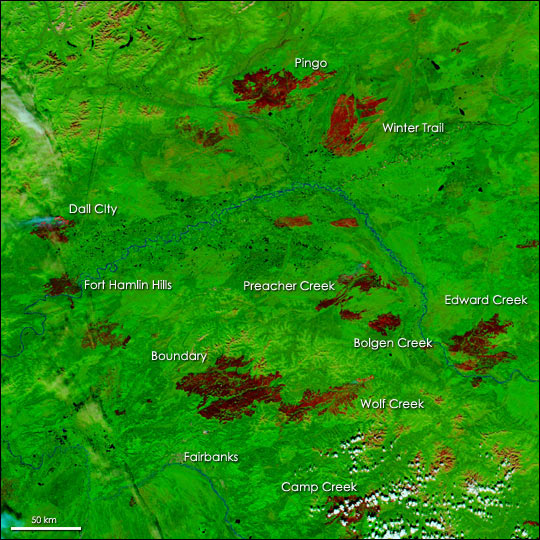 Large tracts of charred land form the dark burn scars that mar the landscape north of Fairbanks, Alaska in this false-color image, captured by the Moderate Resolution Imaging Spectroradiometer (MODIS) on NASA’s Aqua satellite on August 5, 2004. The most recent fires, some of which are still burning, have formed rich, dark brown scars, while older scars have faded to a lighter tan. The Yukon River curves through the center of the image, separating the Pingo and Winter Trail burn scars from the other fire scars in the south.

As of August 6, a total of 5,566,358 acres have burned in the United States in 2004. Of these, 4,452,735 acres were in Alaska. The largest of the burn scars shown in this image was created by the Boundary Fire, 20 miles northeast of Fairbanks. The fire has been burning since June 13, and has consumed 503,362 acres. The Alaska Department of Natural Resources reports that the fire was 35 percent contained on August 6. To the northwest, a thin blue plume of smoke is rising from the Dall City fire.

Most of the fires were ignited by lightning in mid-June, and burned throughout July. At their height, these and other fires burning in Alaska and Yukon Territory sent thick smoke across much of North America and over the Atlantic Ocean.

The high-resolution provided above is at MODIS’ maximum resolution of 250 meters per pixel. It is available in additional resolutions.