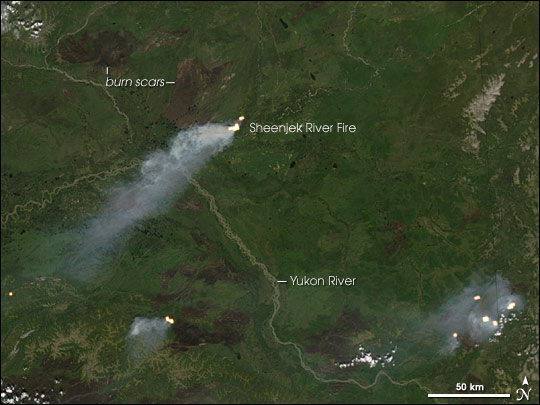 A record fire season in 2004 left its scorching marks across Alaska. Amid the green of almost-summer, charcoal-colored burn scars are scattered across the Yukon Flats region of eastern Alaska, while this season’s fires burn nearby. More than 6 million acres of forest and tundra burned in Alaska in 2004, the largest season on record. The season took off to a roaring start in mid-June, when an astounding 14,700 lightning strikes hammered the state in just two days.

This image from June 14, 2005, was captured by the Moderate Resolution Imaging Spectroradiometer (MODIS) on NASA’s Aqua satellite. Areas in which MODIS detected actively burning fires are indicated in yellow. The largest fire in the scene is burning along Sheenjek River, and as of June 15, the lightning-caused fire was estimated to be about 8,000 acres. To the northwest of the Sheenjek Fire, the purplish-charcoal burn scars of 2004’s Winter Trail (directly northwest) and Pingo Fires (farther northwest) are clearly visible. Other fires are visible around the Alaska-Canada border in the right-hand side of the image, southwest of image center in the Preacher Creek area, and along the Hodzana River toward the upper left.

According to weather briefings provided by the Alaska Fire Service, fire danger will remain high in northern Alaska for the next week. As of June 15, 235 fires had burned just over 46,000 acres in Alaska.