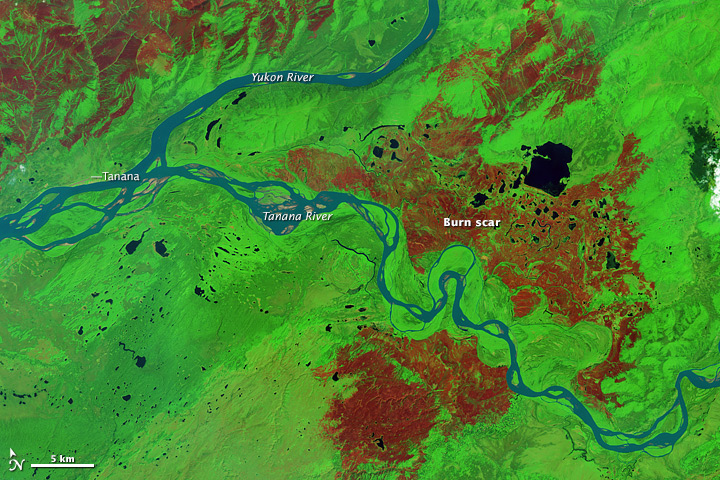 In mid-July, Alaska seemed to be headed toward its worst wildfire year on record. But then a period of cool, wet weather arrived later in the month and calmed several large fires. Government officials also trimmed tens of thousands of acres from earlier estimates of burned area after they acquired more accurate data.

Of the hundreds of fires that raged in Alaska in 2015, those near the town of Tanana were responsible for the largest portion of the damage. The Tanana fires charred about 496,000 acres, an area half the size of Rhode Island. With fires approaching from three sides, many of Tanana’s 300 residents evacuated in June. Some were forced to flee by boat because the airstrip was so blanketed with smoke, according to news reports.

The Operational Land Imager on the Landsat 8 satellite acquired this false-color image on July 24, 2015. With this band combination, burned forest appears brown. Unburned forest is green. Tanana’s airport is visible in the upper left of the image. Download the large image to see several other burn scars from the area.

Many scientists see the fingerprints of climate change in Alaska’s active fire season. Earlier in the spring, the state faced a record-breaking heat wave. On average, Alaska has warmed by 3.4 degrees Fahrenheit (1.8 degrees Celsius) since the 1950s, about twice the U.S. national average. Three of Alaska’s top five wildfire seasons have occurred since 2004. 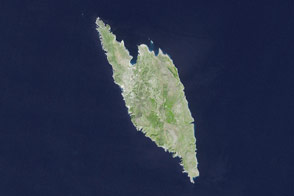