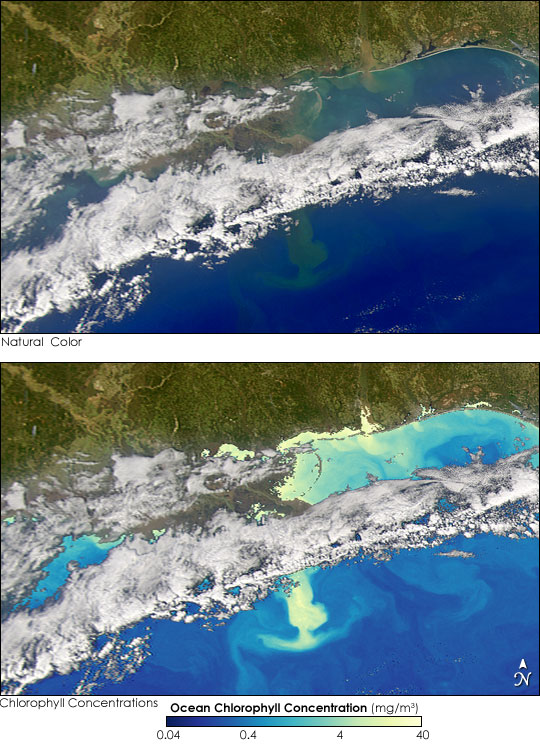 A dark green plume of phytoplankton extends away from the crow’s foot of the Mississippi River Delta in this image, acquired on December 13, 2004, by the Sea-viewing Wide Field-of-view (SeaWiFS) Sensor flying on the OrbView-2 satellite. Phytoplankton blooms usually occur where cold water rushes up from the bottom of the ocean carrying nutrients to sunlit waters. In this case, the bloom may be related to recent flooding along the Mississippi River and its tributaries. Heavy rains early in December triggered floods across the southeastern United States. The draining flood water carried agricultural run-off into the Mississippi River and the Gulf of Mexico, and that may have provided the nutrients the microscopic ocean plants needed to thrive.

In the above images, the Red River twists across southeastern Louisiana from the upper left corner and pours into the Mississippi River beneath the cloud bank. Also concealed by clouds, the Mississipppi drains into the Gulf of Mexico, but just beyond the river’s mouths, the Gulf of Mexico is green with phytoplankton. The lower image shows high chlorophyll concentrations, yellow, corresponding to the green bloom.

Phytoplankton are an important source of food for many marine animals, so waters that are rich in phytoplankton usually support a thriving ecosystem. But in some cases, phytoplankton blooms can be deadly to the very ecosystem they typically support. Some blooms, such as red tide, are toxic and result in wide-spread fish deaths. Large blooms can also create dead zones in the ocean—oxygen-poor regions where fish cannot survive—when the plants die. The bacteria that break down the decaying plants consume all of the oxygen, leaving a dead spot. The Gulf of Mexico is annually plagued with one such dead zone every summer near the location of the current bloom.

NASA image courtesy the SeaWiFS Project, NASA/Goddard Space Flight Center, and ORBIMAGE. NOTE: All SeaWiFS images and data are for research and educational use only. All commercial use of SeaWiFS data must be coordinated with ORBIMAGE.