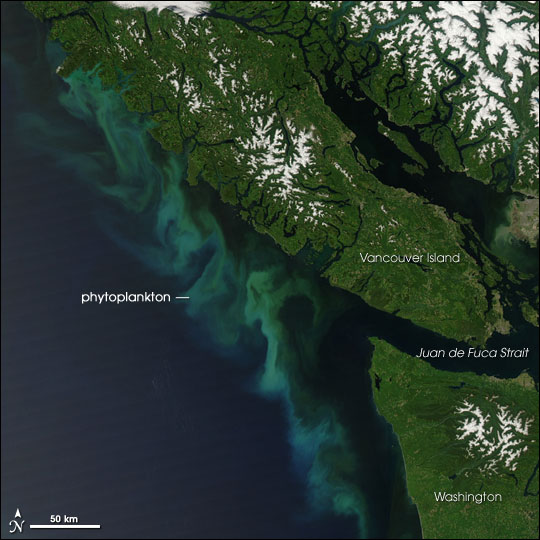 The bright blue and green swirls that the Moderate Resolution Imaging Spectroradiometer (MODIS) detected off the coast of Vancouver Island, Canada, were made by millions of tiny ocean plants called phytoplankton. The coastal waters of the Eastern Pacific are productive because wind and ocean currents allow nutrient-rich water from deep in the ocean to rise to the surface. The cold, rising water carries phosphates and nitrates, which act as fertilizer to the phytoplankton that grow in the sunlit waters at the ocean’s surface. Since phytoplankton are the base of the food chain, areas that support large phytoplankton blooms tend to have large fish populations.

Off the coast of Vancouver Island and Washington State, phytoplankton blooms tend to happen when winds blow down the coast from the north. The winds push the ocean’s surface water west, out to sea. Deep water rises up to replace the wind-blown surface water, and it carries the nutrients needed to support phytoplankton blooms. The Moderate Resolution Imaging Spectroradiometer (MODIS) on NASA’s Aqua satellite captured this photo-like image on June 25, 2006.

The large image provided above has a spatial resolution of 250 meters per pixel. The image is available in additional resolutions from the MODIS Rapid Response Team.