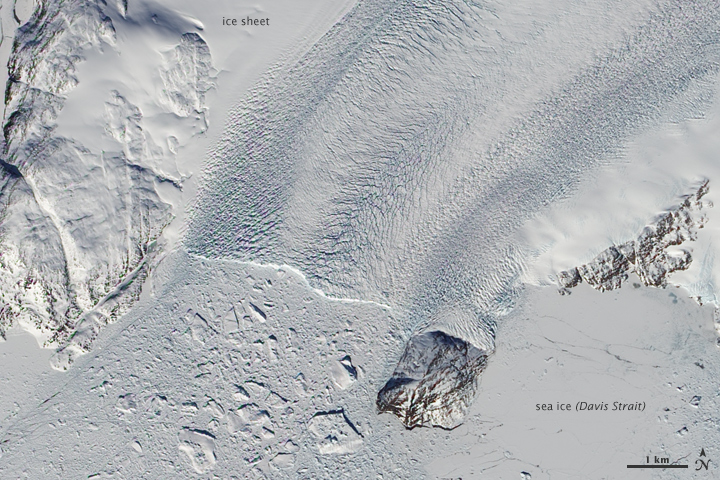 The shoreline of Greenland is an endless, serrated maze of narrow, glacier-filled fjords and small, rocky islands. This natural-color image from the Advanced Land Imager on NASA’s Earth Observing-1 (EO-1) satellite shows the heavily crevassed terminus of the Kong Oscar Glacier, one of several glaciers that drain the northwestern part of the Greenland Ice Sheet.

Kong Oscar Glacier empties into the Davis Strait, which was choked with sea ice on May 14, 2010, when the image was captured. The smooth surface of the sea ice contrasts with the mixture of small and large icebergs at the mouth of Kong Oscar Glacier; the ice mélange looks like an expanse of Styrofoam blocks.

As part of a comprehensive survey of Greenland’s glaciers that was published in 2006, scientists documented that the mass balanceâ€”the sum of gains through snow accumulation and losses through iceberg calving and meltingâ€”of Kong Oscar and Greenalnd’s other northwestern glaciers was strongly negative between 1996 and 2005: they lost more ice than they gained. The pattern was similar to the ice sheet as a whole, which has been losing ice mass at an accelerating pace in the past decade.