Aerosols and Carbon Monoxide over Africa and Asia 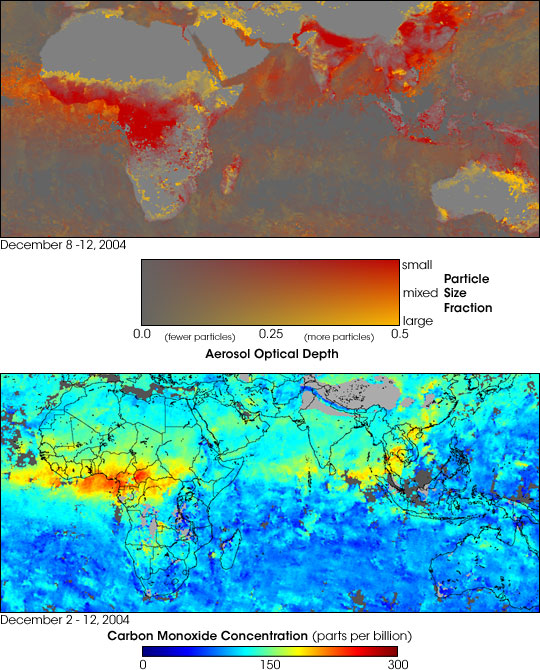 Thanks to natural processes and human activities, the atmosphere contains more than just the oxygen and nitrogen that are the major contributors to its chemical profile. Volcanic eruptions, human-caused and naturally occurring fires, erosion, sea spray, dust storms, and the burning of fossil fuels all contribute ”something extra” to the atmospheric mix. For scientists studying Earth and its interrelated systems, knowing where these atmospheric “extras” come from, how widespread they are, and where they end up is the first step to figuring out what effect they might have on climate, people, and other living things.

This colorful pair of images shows satellite observations of the atmosphere collected by two different sensors on NASA’s Earth-observing Terra satellite. In the top image, amounts of aerosol particles over Africa and Asia between December 8-12, 2004, are colored red for small particles and gold for large particles. The brighter the colors, the more aerosols were present. The bottom image shows concentrations of carbon monoxide from December 2-12, 2004, colored in shades of blue (lowest) to red (highest). The aerosol measurements come from a sensor called MODIS, short for Moderate Resolution Imaging Spectroradiometer. The carbon monoxide measurements come from a sensor called MOPITT, short for Measurements of Pollution in the Troposphere.

The easiest trend to spot is the arc of high concentrations of both aerosols and carbon monoxide that stretches from the upper right edge to the left center edge of the image. This arc runs from southern China, through Southeast Asia, India, the Indian Ocean, and Africa. How do these images help scientists determine the source of the emissions?

For aerosols, the size of the particle is a key indication of the source of the particles. Large particles tend to be dust from deserts like northern Africa’s Sahara, or salt crystals from wind-whipped white caps on the ocean. Small, fine, particles usually come from combustion—the burning of vegetation and of fossil fuels. Carbon monoxide is a second atmospheric signal of combustion of those same types of carbon-based fuels.

The location and time of year also give scientists information about the source of the aerosols: December is a time for large-scale agricultural burning in Africa and Southeast Asia. People set fire to old crops and also to forests to clear new land for planting and grazing. In places north of the equator, like China, colder winter temperatures cause people to burn more coal, wood, and other carbon-based fuels for heat and energy.

Scientists have coined the term “brown cloud” to describe the mixture of aerosols and pollution like ozone and carbon monoxide that flow outward from Asia into the Indian and Pacific Oceans. To read more about the phenomenon, see a related story about Haze Along the Himalaya Front Range.